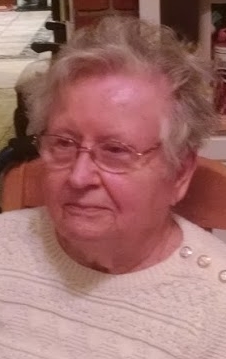 Mildred Bernice Swackhamer, née Johnson was born on January 31st, 1924 in Pleasant Hill, MO. She attended public schools and graduated from Smith Cotton High School in Sedalia in 1942. In 1946, she graduated magna cum laude and Phi Beta Kappa from the University of Missouri with a Bachelor’s of Science in Chemistry. She married Robert E Swackhamer, a Missouri State Highway Patrolman and Marine Corps veteran, on February 27th 1948 in Marshall, MO.
She was an accomplished violinist and played in the Jefferson City Symphony for a time. She finished a Master’s Degree in Education at Lincoln University in the spring of 1962, and that fall she began teaching math and science at Simonsen Junior High School in Jefferson City. In 1968 she moved with her family to Springfield, where she continued teaching math and science. She taught first at Hickory Hills Junior High School, then at Hillcrest High School until her retirement in the early 1980s.
She enjoyed her retirement, and traveled widely with her husband. They celebrated 67 years of marriage, until his death in 2015 at the age of 99. She was an avid life-long bridge player, and continued to play until the week before her death. Mildred passed away on Sunday, August 12th after a short illness. She is survived by her brother, Charles Johnson of Jefferson City, by her sons Robert L. Swackhamer of Toms River, New Jersey, and Thomas Swackhamer of Flower Mound, Texas, by her grandchildren Brian Swackhamer, Elizabeth Davidson and Robert W. Swackhamer, and by numerous nieces and nephews.
A memorial service will be held at 10 am on Saturday, August 18th, 2018 at Greenlawn Funeral Home East with the Rev. Lori Lambert officiating. There will be a visitation on Friday, August 17th from 6:00 to 8:00 pm at the funeral home. The burial with be a private service conducted at the Missouri Veterans’ Cemetery.