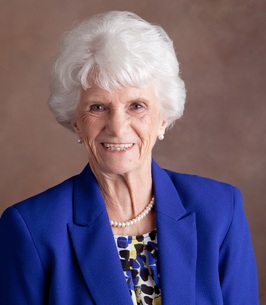 Milly was devoted to God and family. She had a down-to-earth walk with God that drew a lot of people into her orbit. To many she was affectionately known as ‚ÄúMomma Milly.‚Äù Her practical faith and committed determination to work together with God to build a strong family remains her lasting legacy. She arose, like Deborah, as a mother in Israel (Judges 4:7).

While serving in the Nebraska District, she and her husband sensed God‚Äôs call to serve as missionaries to Latin America. After raising funds, they and their two oldest children, Donald and Debora, arrived in Nicaragua in 1954. For the next 12 years they evangelized, planted churches, directed a Bible school, and wrote and published Spanish literature. Two more children ‚Äî Marcus and Timothy ‚Äî completed the family.

In 1989, Loren was elected executive director of Assemblies of God World Missions. While Loren was in office, Milly focused on building a strong missionary family. The Tripletts retired from AGWM in 1997 and continued to minister in both the United States and overseas for a number of years.

Milly is survived by her children: Don and his wife, Terri, missionaries to El Salvador; Debbe Goff and her husband, Lon, of Springfield, Missouri; Marcus and his wife, Janette, pastors of Thee Garden International Fellowship in Daytona Beach, Florida; and Tim and his wife, Suzan, of Canyon, Texas; and 12 grandchildren and 29 great-grandchildren.

“But you have come to Mount Zion, to the city of the living God, the heavenly Jerusalem. You have come to thousands upon thousands of angels in joyful assembly, to the church of the firstborn, whose names are written in heaven. You have come to God, the Judge of all, to the spirits of the righteous made perfect, to Jesus the mediator of a new covenant, and to the sprinkled blood that speaks a better word than the blood of Abel,” (Hebrews 12:22-24).