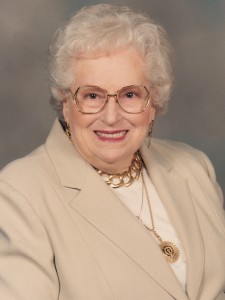 Springfield, MO–Mildred (Slavens) Musick-Good-Duke, 92, a long time resident of Springfield passed away on Friday, January 16, 2015 at the Maranatha Manor in Springfield, Missouri. Mildred accepted the Lord Jesus Christ as her personal Savior as a teenager while attending Emanuel Baptist Church in Springfield, Missouri. Mildred and husband, John were members of Cherry Street Baptist Church for over 30 years, serving and counting the church’s weekly offerings for some 26 years every Monday morning with many of their friends. Mildred, affectionately called “Mick” was born on September 2, 1922 in Harrison, Arkansas to Homer and Eva Slavens. She is survived by brother, Herbert (Laura) Slavens of Royse City, Texas, and sister Myrtle Shaw of Springfield, and a sister-in-law Norma Slavens. Preceding her in death are her parents, husbands JohnM.Musick, Oscar Good, Leroy Duke, brothers: Eldon, Floyd, James,Wilburn (Dub) and sisters: Renona Frank, and Viola Hensley. Surviving children are son John M. Musick, Jr. and beloved daughter-in-law, Ruth of Pleasant Hope, Missouri; daughter Janet Musick Watkins and son-in-law Ed Watkins; and son Jackey Musick. Grandchildren Matthew (Wendy) Musick of Raymore, Missouri, Brad (Brenda) Musick of Highlandville, Missouri. Brian (Shannon) Watkins of St. Charles, Missouri and Ashlee (Rick) Watkins Johnson of St. Charles, Missouri. Great Grandchildren Mason, Mylie, and Mia Musick of Raymore, Missouri; Ellie and Drew Watkins of St. Charles, Missouri; Anna and Jake Johnson of St. Charles, Missouri; numerous nephews, nieces, and cousins. She graduated from Central High School in 1940, worked for Coca-Cola, and attended business school before marrying John Musick. After John’s retirement from Campbell“66”Trucking Company, and the birth of grandchildren, Mildred recreated herself by joining the National Federation of Grandmothers Clubs of America. In 1969, she started serving almost every position possible and ended as National President of the Grandmother Clubs of America from 1986 thru 1988. She was known nationally for her abilities to organize local grandmother Clubs in many states. Locally, she served as President of the Galaxy Grandmother’s Club #342 for many years and various offices of the Sorosis Club of Springfield. After the death of John in 1992, she later married Oscar Good, (deceased 1999) and Leroy Duke, (deceased in 2007). A Memorial service will be held on Wednesday, January 21, 2015, 10:00 am at the Greenlawn Funeral Home North followed by interment at Greenlawn Memorial Gardens. Visitation will be Tuesday evening from 6:30 to 8 pm. Memorial gifts may be made to the National Federation of Grandmothers Clubs of America Charity: “Cure Childhood Cancer”. Checks should be mailed to Chairperson: Mary Ann Hermansen, 60 Tiller Court, Staten Island, NY10309. Visit www.nationalgrandmotherclubs.com.