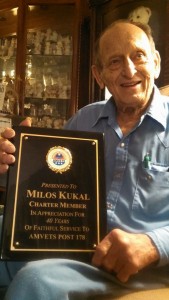 Milos Kukal, age 91, of Springfield, MO, passed away Sunday, January 17, 2016 in his home, surrounded by his children and grandchildren. He was born October 7, 1924, in Polk County, MO, to Frank and Henrietta (Kochar) Kukal. He was a member of the Grace United Methodist Church. He served in the United States Navy during W.W.II as a submariner. He was an active member of the AMVETS Post 178, American Legion, and a volunteer for the Disabled American Veteran’s Association. He worked at Holsum Bakery for 37 years. He was also the Business Agent for the Bakery, Confectionary, Tobacco Workers and Grain Millers Union Local 235. He was an avid hunter and fisherman all of his life.
He was married for 60 years to Juanita Pauline Kukal, until her death April 3, 2013. He was also preceded in death by his parents, brothers Fred and Joseph Kukal. He is survived by his son Frank Dennis Kukal, Springfield, MO, his daughter, Julie Michelle Cook, Ozark, MO, his grandson Jordan Matthew Kukal, grand daughter Hannah Rae Cook. He is also survived by his brother, Roy Kukal, and his wife Joann of Kansas City, KS and his sister Frances Carlson, and her husband Stener of Loveland, CO and sister-in-law, Agnes Kukal, Bolivar, MO. He is also survived by numerous other family members.
Funeral services will be held at 10:00 a.m., Thursday, January 21, 2016, at Grace United Methodist Church, Springfield, MO with Rev. Diana Hagewood Smith officiating. Burial will be held in Greenwood Cemetery, Bolivar, MO. Visitation will be held from 6:00 to 8:00 p.m. on Wednesday, January 20, 2016 at Grace United Methodist Church. Memorial contributions may be made to Grace United Methodist Church or to Hospice Compassus. Services have been entrusted to Greenlawn Funeral Home North, Springfield, MO. Online condolences may be made at www.greenlawnfuneralhome.com.