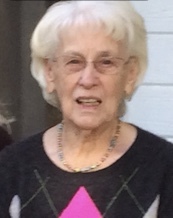 Our mom, Minnie Earlene Roderman, was born on January 15, 1924, in Reynolds County, Missouri to Abraham Perry and Emma (Bowman) Grogan.

Her parents, her 14 siblings, and her loving husband, Dolman, preceded her in death.

Mom and Dad were married in October of 1947 and were sweethearts until his passing in 2003. Beginning shortly after their marriage, and for 50-plus years, they served several pastorates in Missouri. Mom was the consummate preacher's wife . . . always accompanying Dad to visit shut-ins, sick parishioners, and church family while seldom missing any church service or function. She firmly believed her place was by his side and he often said he probably couldn't have preached if he couldn't look back and see her in the pew. She was his biggest fan and constant inspiration.

During Mom and Dad's later years, neighbors commented that when they saw one of them, the other was always close by–and usually they were hand-in-hand. Dad nicknamed her his “Honey Bee” and she remained so until his last day on earth. They were the true definition of what a marriage should look like. Before their 50th anniversary, Dad chose the song “Look at Us” by Vince Gill as their song. It fit so perfectly that it could have been written just for them.

As a mom, she dealt out instant discipline with a firm hand, never once using the line, “Just wait until your dad gets home.” She was just as quick to comfort us and dole out affection (which was often in the form of our favorite food).

She took to “grandmotherhood” instantly with the birth of her first grandbaby. She sewed dresses for Heidi, played catch with Ben and J.D., and hosted backyard picnics, regardless of the weather . . . all the while balancing love and discipline—heavy on the “love” part when it concerned her grandbabies.

Unfortunately, by the time the three great grandbabies came along, Alzheimer's was beginning to rear its ugly head and prevented mom from bonding so closely with them, although she always enjoyed visits with them and never seemed bothered by their noise and playfulness. They will, forever, miss the influence of their beloved “Momo.”

Mom will be forever missed by her family who survives her and must now live in a world without her gentle presence. They include: daughters, Mary (Barney) Wilson, Wanda (John) Lawrence, grandchildren and great grandchildren, Heidi D. Davis, Bentley Edward (Christine) Davis and Emma and Nathan, John Douglas III (Jena) Lawrence and John Douglas IV (Jack).

Others who will miss her are siblings-in-law, Jim Roderman and Louise Roderman, many nieces and nephews, long time friends, caregivers and staff at Truman-Lakewood Care Center.

Mom led a full and exemplary life of Christian service and we are assured that she and Dad will enjoy a grand reunion until we get there to celebrate with them.

Rest well, Mom. You've earned your rest and left us with a beautiful legacy.

Funeral Services will be at 2:00 p.m. Saturday, August 3, 2019, at Greenlawn Funeral Home North, with burial to follow, in Greenlawn Memorial Gardens. Visitation will be from Noon to 2:00 p.m. before services.