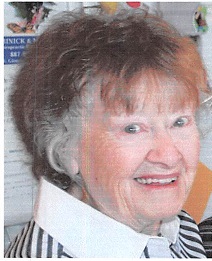 Monta McWhorter age 100, of Springfield passed away Monday, September 19th, 2016 at Willard Care Center.
She was born November 7, 1915 in Bloodland MO, the daughter of William Harvey and Florence Blalock. She was united in marriage to Encel Samuel McWhorter. Monta lived life to it’s fullest, She was an amazing Christian Woman, who took pride in being a wife, mother, and grandmother.
She was preceded in death by her loving husband, Encel, Samuel (Mac) McWhorter; one daughter, Joann Thompson; two granddaughters, Debbie and Denise; her parents William Harvey and Florence Blalock; two brothers, Ernal and Bill; and one sister, Leila Hopkins.
Survivors include her loving son Tim McWhorter and wife Diane, Springfield; seven grandchildren; numerous great and great-great-grandchildren; and a host of family and friends.
Funeral Services will be held Friday, September 23rd, 2016 at 1:00 pm in Greenlawn Funeral Home- North. Burial will be Monday, September 26, 2016 at 1:00 pm, at Rolla Cemetery.