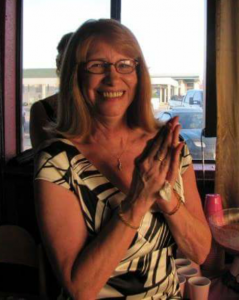 Nancy Arlene Stanfield-Stewart, 64, passed away March 18, 2015 in Springfield, Missouri. She was born June 5, 1950 to Forest and Vonna Lee Stanfield. Nancy attended Hillcrest High School from 1964 to 1968. She was a long time employee at GE until January 2002. Nancy was a loving mother, sister, aunt, and nana. Those that knew her, loved her, and she will always be remembered in their hearts.
Nancy is preceded in death by her husband, Raymond Leroy Stewart; her mother and father, Vonna Lee Stanfield and Forest Stanfield, and her younger sister, Rebecca Walker.
She is survived by her three daughters and their husbands, Angela (Kliewer) and Jason O’Neal, Kristine (Kliewer) and Jimmy Pearcy, and Stephanie (Kliewer) Robbins; seven grandchildren, Brittany, Hannah, Haylie, Jacob, Grace, Emma, and Emmy; her older sister, Patricia Stanfield Phillips; and many other family members, as well as close friends whom she considered her family.
Services will be held Monday, March 23, 2015 at 1:00 p.m. in Greenlawn Funeral Home South. A visitation will be held Saturday, March 21, 2015 from 5:00 – 7:00 p.m. at Greenlawn Funeral Home South. A private family burial will be held at a later date.