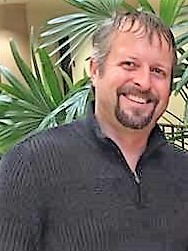 Neil Aaron Hollinger, age 45, passed away on Wednesday, October 10, 2018. Neil was born in Paola, KS on September 3, 1973 to Dale L. Hollinger and Pamela J. Debrick Hollinger. He graduated in 1992 from Midway ISD in Waco, TX. In 1996, Neil earned a Bachelor’s Degree in Criminal Justice and was a member of Sigma Chi Fraternity at Texas State University. On March 10, 2012, Neil was united in marriage to Emily Marie Langston. Neil Hollinger and Emily Hollinger welcomed daughter, Genevieve Hollinger, on August 22, 2012. In January 2016, Neil dedicated his life to Christ at James River Assembly of God in Springfield, MO.
Neil was a long-term employee at Century Link in the Kansas City area before moving to Raleigh, NC and Tampa, Florida where he was a full-time father. He loved his family, the Dallas Cowboys, the Texas Longhorns and his many friends. Neil was preceded in death by his beloved grandfather, Clarence “Buck” Hollinger, his father, Dale Hollinger, and his close friend and father-in-law Tom Langston. He is survived by his wife Emily, daughter Genevieve, grandmother Genevieve L. Hollinger, grandmother Jane Debrick and grandfather Ernest Debrick, mother Pamela Pringle and step-father Jerrell D. Pringle, brothers Guy L. Hollinger, James C. Pringle, Ryan York, Matthew York, many friends and extended family members.
Neil played many sports as a child but was most fond of football. He was a good student who served on student council as a freshman at Midway High School in Waco. He moved to Paola, Kansas, and played football for the Paola Panthers his sophomore year. Grandfather Buck Hollinger was his biggest fan and attended every game to cheer him on. Neil moved back to Texas and played football for Midway High School his junior and senior years where he was an award winning tailback. Growing up, Neil also loved to fish, and attend hot-rod races with his family. Later in life he enjoyed hiking in the mountains, scuba diving, traveling, and watching the Cowboys. His greatest joy in his life was his daughter Genevieve Hollinger.
We can proudly say that Neil made a lasting impression on everyone that he met. His energy, mischief, sense of humor, and charm are what his friends and family loved most. We will all miss the joy and love that he brought into our lives.
Memorial Service will be held at Greenlawn Funeral Home East, 3540 Seminole Springfield, MO 65809. Visitation will be at 8:30am and service will begin at 10am. In lieu of flowers a contribution can be made to Lost and Found grief center. Donations can be made online at http://www.lostandfoundozarks.com/Donate.

Arrangements are under the care and direction of Greenlawn Funeral Home East, 3540 E. Seminole, Springfield, Missouri.