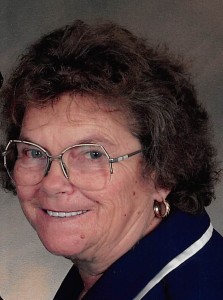 Nermal Lou (Jones) Walters, 77, of Brighton, MO, passed away on November 29, 2015, in Bolivar, MO.
Nermal Lou Jones was born in Rogersville, MO, on July 28, 1938, to Walter and Matilda (Cornett) Jones. She was married to Harry Franklin (Frank) Walters on August 31, 1956 and to this union three daughters were born: Norma, Glenda and Christina. Nermal Lou devoted her life being a loving wife and a stay at home mom and grandma. She worked many years alongside her husband on their farm.
Nermal Lou was preceded in death by her parents, a brother, Melvin Jones, two sisters, Minnie and Lillian Jones and two brothers –in-law, Leonard McCubbin and Frank Brazier. Nermal Lou is survived by her husband of 59 years, Frank, three daughters, Norma Walters, Glenda Swearengin and husband Steve, and Christina McConnell, three grandsons: Dylan, Jacob and Wyatt McConnell, and their dad, Billy McConnell, two granddaughters: Ashley and Abbey Swearengin, one brother, Lloyd Jones, three sisters: Ruth McCubbin, June Walters and husband Leroy, and Patsy Brazier and was “Aunt Hookie” to many nieces and nephews.
Visitation will be held Friday, December 4, from 6:00 – 8:00 PM at Greenlawn Funeral Home North. A funeral service will be held Saturday, December 5, at 3:30 PM at the funeral home. Burial will be at Mt. Comfort Cemetery, Springfield, MO, immediately following the funeral service.