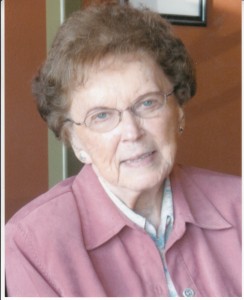 Nina Rockstrom, age 90, of Springfield, MO, passed away Saturday, February 21, 2015 at MaranathaVillage. She was born January 31, 1925, in Yakima, WA, to Albert and Ruth (Johnson) Rockstrom. She graduated from YakimaWashingtonHigh School and WashingtonStateUniversity with a degree as a Pharmacy Lab Technician. After college Nina worked as a lab tech for a little while, until she found out that she was actually allergic to her job, she than opened and operated her own dress store for several years, she later became a stock broker. Nina and her friend Vera were very active in the NazareneChurch in Phoenix and PaysonAZ. In 2005 Nina and Vera moved to MaranathaVillage. Nina enjoyed flowers, the outdoors and traveling the world, she especially enjoyed her trips to Sweden, to see all of her relatives.
She was preceded in death by her parents, Albert and Ruth Rockstrom, and one brother Raymond Rockstrom. She is survived by her three nephews, Ron Rockstrom and wife Diann, Tom Rockstrom and wife Violette, and Dave Rockstrom and wife Cherie; great-nephew and nieces, Matthew, Kensie, Macie, Tiffeny, Jocie and husband Jeff and their son Tommy; her very dear friend, Vera DeBruler; and a host of family and friends.
A celebration of Nina’s life will be held at 10:00 a.m., February 27, 2015, at Maranatha Chapel, Springfield. Burial will be held at TerraceHeightsMemorial Park, Yakima, WA. Visitation will be held from 9:00 a.m. to 10:00 a.m. on February 27, 2015 at Maranatha Chapel. Memorial contributions may be made to the Maranatha Village Chapel. Services have been entrusted to Greenlawn Funeral Home North, Springfield, MO.