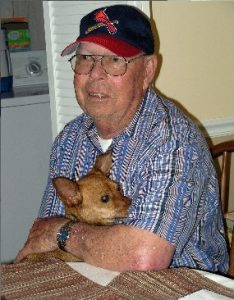 Ollis Dale Harp, 74, passed from this life at his Springfield home on July 20, 2016. Visitation will be held Sunday, July 24, 3:00-4:30 pm with funeral services set for 11:30 a.m. Monday, July 25, at Greenlawn East Funeral Home. Private burial will follow at 1:00 at Missouri Veterans Cemetery.
Dale was born August 9, 1941 to William Olis and Mattie Belle (Page) Harp at the family farm a few miles east of Checotah, OK. When he was a year old, his family loaded their meager possessions in a truck and migrated to the southern end of the San Joaquin Valley to the town of Lamont, near Bakersfield, CA. Dale’s brother Paul recalls that the trip took seven days, seven nights and seven tire repairs before reaching Lamont.
Dale grew up in Lamont, graduating high school in Arvin, CA. He then spent four years in the Air Force. His last tour of duty was at Hickam Field, Honolulu, and on July 6, 1963, he flew home to marry Pat Neal. When Dale left the service later that year, they made their home in Lamont, and in later years moved to Bakersfield, before eventually relocating to Springfield.
Dale was automotive manager at K-Mart and later manager for U-Haul. He was long time office manager for the Lamont Ace Hardware, a job he loved but eventually had to retire from due to disability from two back surgeries.
Dale was a very active volunteer most of his adult life. He served several years in the Lamont Jr. Baseball Association. He was responsible for the forming of the Kern County Sheriff’s Citizens Patrol. He spent parts of many summers as night security at Yosemite Bible Camp. He also served as deacon of finance at Highland Church of Christ in Bakersfield. Shortly after moving to Springfield, he discovered that Thrift Haven was in need of volunteers, and he worked there for several years before his health deteriorated.
Dale was a member of Watermill Church of Christ and a former member of the Rogersville Church of Christ.
He is preceded in death by his parents and two siblings, brother, Gerald Harp and sister, Joyce Jordan.
Surviving Dale are his wife, Pat, daughter Lisa Harp and son Joseph, all of Springfield. Also three grandchildren, Heather Williams Jung, Brittany Williams and Matthew Williams, all of Spiro, OK; four great grandchildren, Michael Williams, D.J. and Makayla Jung, and Kyra Williams, all of Spiro. Surviving siblings include Helen (Don) Williams of Bakersfield, CA, Paul (Jackie) Harp of Searcy, AR and Jan (Lew) Wasson of Albuquerque, NM.
The family wishes to thank Lori, Jan, Bonnie and the entire staff at Hospice Compassus for the loving care given to him during his long illness.
In lieu of flowers, the family asks that donations be made to the Fair Haven Children’s Home, 3132 N. Fair Haven Loop, Strafford, MO 65757.