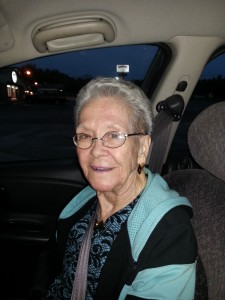 Oma Arzell Quinn, 83, passed away on January 17, 2015 at Bristol Manor in Willard, MO.
She was a former resident of Weaubleau, MO and Heyworth, IL. Arzell was born September 22, 1931 in Boyenville, MO to Archie and Anne Wilkerson. She married Earl Quinn during November 1969 in Heyworth, IL. She loved watching Cardinals baseball, sewing, traveling when she could, watching the birds at her bird feeder and most of all spending time with her family.
She was preceded in death by: her parents, Archie and Anne Wilkerson, her sister, Mary Lee Wilkerson, her husband, Earl, and 2 daughters, Oma Nowell and Patricia Hodge. She is survived by her children: Imogene Chase- Bloomington, IL; Donna Nevius- McLean, IL; Peggy Blazier- Greenridge, MO; Willis Nowell – McLean, IL; Archie Nowell – Bloomington, IL; Daphne Ball – Avondale, AZ; Mark Coone and Earlene Lawson – Willard, MO. She is also survived by 20 grandchildren, 33 great-grandchildren, 1 great, great-grandchild, a brother Sherman Wilkerson – Normal, IL; a sister Shirley Sumpter – Avondale, AZ, numerous nieces, nephews, cousins and close friends.
Visitation will be Tuesday, January 20, 2015 from 6-8 p.m. in Greenlawn Funeral Home South. Services will be Wednesday, January 21, 2015 at 10 a.m. in the funeral home with burial to follow at 1 p.m. in Robinson Cemetery in Weaubleau, MO.