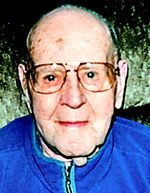 Orla Womack
Orla Womack (August 30, 1906 – August 15, 2009) of Springfield, formerly of Strafford, Missouri, was blessed with excellent health until he stepped through Heaven’s Gates Saturday afternoon, August 15, at the age of 102 years, 11 months and 15 days. He had been a resident of Springfield Rehabilitation and Health Care Center for four years. The family would like to thank everyone for the excellent care and special attention they gave him. Orla was born in Bassville, Missouri, August 30, 1906, to Luey and Julia Trantham Womack. He accepted Christ as his Savior at 14 years of age and joined Bass Chapel Baptist Church, where he was a member for 48 years before moving to Springfield and joining what is now National Heights Baptist Church, where he was a member for 42 years. In 1925, Orla married Opal Pickering and to this union two children were born, Wilma June and Lewis. After Opal’s death, Orla married Lora Finch in 1967. Orla was preceded in death by his parents; a brother, Ervie; a sister, Dorothy; his first wife, Opal; his second wife, Lora; his daughter, Wilma June Wommack; and a step-son, Harold Finch. He is survived by his son, Lewis and his wife, Jeannie of Springfield; a granddaughter, Barbara Kay Wommack of Aurora; a granddaughter, Cherilynn Womack of Springfield; a brother, Ransom of Marshfield; two stepgrandsons; nieces and nephews; and a lifetime of friends. Orla had been a farmer, mechanic and carpenter, and had worked for over 20 years with Greenlawn Funeral Home. He was an avid fisherman and was never happier than when he was on the river bank or in his boat fishing. Funeral arrangements are with Greenlawn Funeral Home North. Visitation will be held Tuesday, August 18, at 2 p.m., with funeral services at 3 p.m., in the funeral home. Burial will be in Bass Chapel Cemetery, Strafford. Instead of flowers, donations may be made to the charity of your choice