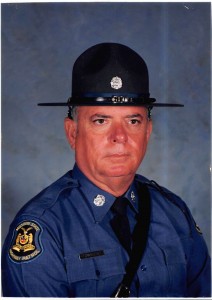 Orval Lee Townsend “OT” passed in peace Sunday, June 5, 2016 at the age of 77.
Orval was born in St. Joseph, Missouri, November 29, 1938 to Marvin and Bertha Townsend. He graduated from Christian Brothers High School in St. Joseph before spending time working for Hughes Aircraft in the state of California and Geeco Inc. in St. Joseph. Orval also served in the United States Army Reserves and was a lifetime member of the A.F. & A.M. Grand Lodge of Missouri. He graduated from the Missouri State Highway Patrol Academy in Rolla in 1967 and discovered a career he became passionate about: Highway Patrolman.
Trooper Townsend began his career in the Chillicothe Zone of Troop H. He had numerous colorful stories which could rival any episode of “Cops”. He was even recognized by police in London, England for his role in the arrest of two burglars at the Kensington Hilton Hotel while on vacation in 1975. Townsend transferred to the Nevada Zone of Troop D in 1983 and retired in 1994 after 27 memorable years. He then served as a reserve deputy with Vernon County Sheriff’s office for several years.
In 2003, Orval and his wife, Naomi, moved to the Ozarks and joined South Gate Baptist Church, forming strong friendships. Together, they traveled through all 50 states and enjoyed taking day trips, dining out, and playing cards with the OFTO Cruisin’ Car Club. Orval was always interested in cars, whether buying, rebuilding, and selling used cars, or collecting classics. Orval will be fondly remembered by family and friends for his sense of humor, spreading laughter by teasing all those he loved.
He was preceded in death by his parents, sister Frances, brother Lloyd, and two daughters: Stephanie and Elizabeth. He is survived by his wife Naomi (Atkins), brother Clyde and Kathy of Lake of the Ozarks, son David and Becky of Grain Valley, daughter Dr. Angela McGuirk and Dustin of Ozark, granddaughters Kayla and Norah Townsend, grandson Jaden McGuirk, Uncle Bob and Aunt Grace Abbott of Las Vegas, and many cherished relatives and friends.
The family would like to express their sincere gratitude to the doctors, nurses, and staff at Mercy Health Systems in Springfield, KU Medical Center in Kansas City, and Barnes-Jewish Hospital in St. Louis.
A Celebration of Life will be held at South Gate Baptist Church in Springfield on Monday, June 13. Visitation will begin at 12:00 followed by a memorial service at 1:00 with Pastor John Black officiating. In lieu of flowers, memorial contributions may be made to the Myasthenia Gravis Foundation or Gideons International. Arrangements have been entrusted to Greenlawn Funeral Home South.