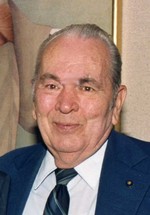 Funeral Services for Orville Langston Barton age 82 of Branson, MO. will be held at 1 PM, Sunday, August 2, 2009 at Greenlawn Funeral Home of Branson with Rev. Kenny Robinette officiating. burial will Follow at Ozarks Memorial Park in Branson, MO. Arrangements are under the direction of greenlawn funeral home of branson.
He died at 5:50PM, Wednesday, July 29, 2009 at his home.
He was born on June 16, 1927 in Peace Valley, MO the son of Henry Zachariah Barton and Una Lee Gentry Barton. He was a retired radio Broadcaster and co owner of the taney county cablevision. He was a united states army veteran and had been a resident of branson since 1954.
He is survived by his daughters, LaDonna Taylor Howard of Branson, MO. and Vicki J. Worthington of Branson, MO., one brother; William Don Barton of Springfield, MO., one sister; Dorothy Cranston of Springfield, MO., four grandchildren, 11 great grandchildren and several nieces and nephews. He was preceded in death by his parents and one brother,Walter Lee Barton.
Visitation will be from 4-6 PM on Saturday, August 1, 2009 at the funeral home.
Memorial contributions are suggested to hospice compassus, 3044 Shepherd of the Hills Expwy, suite 200, Branson, Mo. 65616.