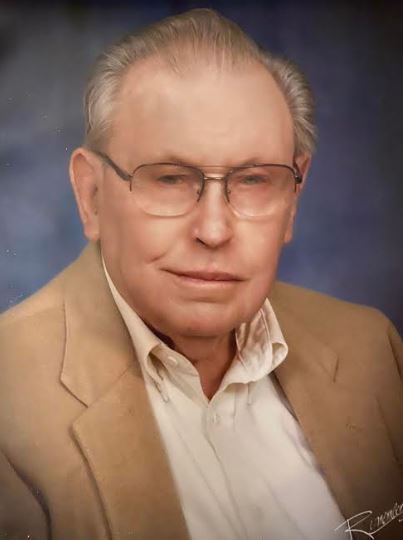 Ovie Dee (Tex) McIlroy (91) died at his daughter’s home on May 16th, 2020. Dee is survived by his daughter Peggy Hedgpeth (Lary), his daughter-in-law Cindy McIlroy, his nephew C.A. McIlroy, his grandchildren Kim Hedgpeth (Janet Crews), Chandra Carey (Sean Carey), Mandi Williams (Jason Williams), and Neeley Brady (Michael Brady). Dee also had eight beloved great grandchildren, Alysson Williams, Taylor Williams, Kylen Crews, Konnor Brady, Steven Brady, Skylyr Carey, Gavyn Carey, and Easton Williams. He was proceeded in death by his adored wife of 68 years, Sybil (Eason) McIlroy, his son Steve McIlroy, and two grandsons Kevin and Kinley Hedgpeth.
Dee was born in Abilene, Texas in 1928 to Carol and Willie Mabel McIlroy. He grew up on a ranch where he enjoyed his life with his three brothers. At 19 years of age he married the love of his life, Sybil “Eason” McIlroy. In 1949 they moved to Springfield, Missouri with their new baby girl, Peggy.
Shortly after, Dee began a long and distinguished career with the Springfield News Leader where he worked his way up to Production Manager. While at the newspaper, Dee who became known as Tex, represented workers on a national level.
Dee was a long-time member of South Haven Baptist Church for over 50 years.
Papa, as Dee was known to all of his grandchildren, loved golfing, traveling, and spending lots of time with his family. He was an avid fan of the MSU Lady Bears Basketball Team and rarely missed a home game. It was a passion he enjoyed well into his 90s.
Visitation will be Tuesday, May 19, from 1:00 – 2:00 p.m. followed by a family service at 2:00 p.m. at Greenlawn Funeral Home East. A public Graveside service will be at Greenlawn Memorial Gardens at 3:30 p.m. Due to Covid 19 regulations, the 2:00 p.m. service will remain family only.