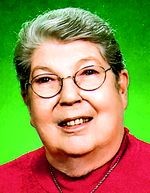 Paula Kilby Roach was born in Peoria, Illinois on January 4, 1931 to Isadora Goddard Kilby and Edwin G. Kilby. She attended Texas A&I University and wedded her loving husband, Benjamin Thomas Roach on April 6, 1951. They moved to Memphis, Tennessee in 1962. In her Memphis church, Gracewood Presbyterian, she taught senior highs, was president of the “Women of the Church”, circle chairman, was elected the first woman deacon, and was awarded a “Lifetime Membership” in the Presbyterian Church. She worked as an executive secretary, then attended Memphis State University, received her RN diploma as the oldest student to graduate from the Methodist Hospital Nursing School. After moving to Springfield in 1988, she joined Campbell United Methodist Church where she was a circle chairman for 12 years; organized and coordinated “Reachout Ministry” for shut-ins; organized and coordinated “Mediloan”, home health equipment for members and families; Circles of Care volunteer. She was also a hospice volunteer, Humane Society volunteer, SNAP (spay/neuter assistance program) volunteer. She was preceded in death by her parents, Isadora and Edwin; and her husband, Ben of 48 years of marriage; as well as their oldest son, Tommy. She is survived by their son, Michael Edwin and wife, Annette, of Lake Charles, La.; their son, Jeffrey Paul and wife, Jo Ann of Williamsville, N.Y.; their daughter, Peggy Kay Riggs and husband, David of Springfield; six grandchildren, Stacy, Allison, Shelley, Daniel, David, and Jennifer; four great-granddaughters, Brea, Isabella, Mikayla, and Katherine. Also, one brother, Edgar Kilby and his wife, Peggy, of Tucson Ariz., a nephew and two nieces. The family requests memorials to be given to the Humane Society, 3161 W. Norton Rd, Springfield MO 65803, or to SNAP, PO Box 14354, Springfield MO 65814, or to Campbell United Methodist Church, 1747 E. Republic Rd, Springfield MO 65804. A special thanks to her Oxford Hospice team. Visitation will be from 4:30 to 6 p.m. Thursday, September 3, 2009 at Campbell United Methodist Church. The memorial service will follow.