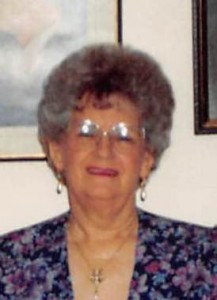 Pauline Dorothy Noble loving wife of Dennis Noble returned to her heavenly home on October 5th, 2015. Pauline was born June 2nd, 1928 to the late Dewey and Myrtle (Strong) Smith in Ozark County, Missouri. She was part of a large, caring family of 10 siblings. Pauline was a loving wife and mother. She took pride in her home and in diligent care for her family. She enjoyed collecting clocks, quilting and camping in the RV on trips to the lake.

She was preceded in death by her parents, her precious daughter, Shelia Teague, her daughter-in-law, Peggy White, and husband of 28 years, Chester White; a sister Edith, sister Sylvia, brother Arlis, brother Prentiss, brother Everett. She would have celebrated 40 years of marriage with Dennis Noble on October 20th, 2015.

A visitation will be from 10:30 a.m., Thursday, October 8, 2015 at Greenlawn Funeral Home East until service time at 11:30 a.m. Burial will be at Missouri Veterans Cemetery, Springfield, MO following the services.