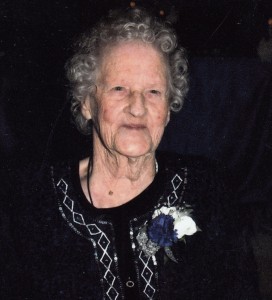 Pauline Marie Buckner Lile Huffman
Pauline was born May 13, 1918 on her parent’s farm near present day Fellows Lake in Greene County Missouri. She died April 13, 2015 in her home in Strafford, Missouri. Pauline was the daughter of Robert (Bob) and Virginia (Jenny) Buckner. Pauline was the granddaughter of Kelsey and Polly Buckner and Jerry McKinnish. Pauline’s sisters were Sally Buckner Foley and Ethel Buckner. She had one brother Ralph Buckner. All have preceded her in death. Pauline was born premature and often credited her grandfather Kelsey Buckner with saving her life. The doctor that delivered her had told the family “because of her premature birth and low birth weight she would not survive”. Her grandfather however relied upon his North Carolina mountain roots and headed to the woods collecting a number of plants. He brewed a tea then fed it to her with the tip of a tea towel. Pauline survived for 96 years and 11 months. Pauline was married to Luther Lile in 1935. They farmed and raised their family together for the next 39 years until Luther’s death in 1974. The farm was located in the Fellows Lake area. They raised cattle, sheep, goats, hogs, horses, chickens, turkeys, geese and even milked dairy cows at different times. They raise all types of grain, seed and hay. At one time they raised cane to produce molasses which they sold at the farm in gallon pails. They had a peach orchard and large garden. They expanded the farm whenever they could by buying adjacent land. After Luther’s death she remained on the farm for the next 10 years with the help of her sons. During this time she had a chance to get back into playing music. This was something she had loved to do during her childhood. During this time she played music with Wilbur and Jane Huffman. Jane passed away with cancer. After a period of time Wilbur and Pauline married and decided to live in Wilbur’s home in Strafford, Missouri. Wilbur passed away in 2013. They had been together for 29 years. During their time together they were very active. They had a large garden and sold produce to the public. They raised all kinds of vegetables and fruits. They continued to play music. They would form a small band and play at festivals of all kinds. They would go to nursing homes. During this time they saw a real need for a “Senior Center” at Strafford. They along with several other local Strafford residents were able to organize and secure funding to build the Strafford Senior Center. Pauline wanted to live her last years in their Strafford home. Her daughter in law, Carolyn Lile, offered to stay with her in the home. She was able to live her final 2 years and die at home at the age of 96 years and 11 months with her family by her side. Pauline is survived by her three sons and daughter in laws Arnold and Carolyn Lile, Roger and Jean Lile and Robert and Pam Lile all of Strafford, Missouri. She is survived by Wilbur’s three sons Wilbur(Smoky) and Winnie Huffman of Austin, Texas, Bill and Nelda Huffman of Harrisonville, Missouri and Danny Huffman of Strafford, Missouri. She is survived by many grandchildren, great grandchildren, step grandchildren, step great-grand children and step great great grandchildren. She is survived by many nieces, nephews and their families. She leaves behind a host of friends and neighbors. Visitation will be Thursday April 16, from 6-8 pm at Greenlawn Funeral Home North. Funeral service will be Friday at 10:00 am in the funeral home. Burial will follow in Prospect Cemetery, Bois D’Arc, MO. In lieu of flowers memorial donations may be made to the Stafford Senior Center.