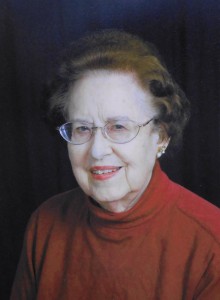 Phyllis Herndon was born March 28, 1926 in Holt County, Missouri to Neil and Ona (Wilson) Lawrence, and died Jan. 9 in Springfield. She was the fourth of seven children, five of whom lived to adulthood.
She spent her early childhood in north Missouri, then her family moved to south Missouri where she lived in Douglas and Ozark counties, and graduated from Gainesville High School. Shortly thereafter she met and married Dale Herndon. They were married for 67 years prior to his death in October 2014.
She was a homemaker, but also worked in several industrial jobs, and retired from Packer Plastics in Lawrence, Kansas.
Dale and Phyllis lived in Missouri, Kansas, and Oklahoma, but then resided for 30 years in Eudora, Kansas. After they retired, they moved to Springfield, Missouri in 1988 and spent many happy years with neighbors and family members there.
Phyllis was a talented artist, and could draw almost anything. She sketched, painted, and embroidered numerous designs. She also enjoyed singing throughout most of her life, and was complimented on her voice even in retirement.
She loved reading, crossword puzzles, and sewing. For many years she made clothes for herself and her children, and also made several quilts. She learned to drive at age 42 and had a license until her eyesight declined.
She was a long time member of the Sunset Church of Christ, helped with World Bible School, and taught Sunday School for many years while living in Kansas.
She is survived by two daughters, Joy Herndon of Springfield, and Sherri Herndon of Clementon, NJ, and two sisters, Eva Rhea of Wichita, Kansas and Pat Gardner of Mountain Home, Arkansas, as well as numerous nieces and nephews.
There will be a visitation on Tuesday, Jan. 12 from 6:00 p.m. to 8:00 p.m. in Greenlawn Funeral Home South. The funeral service will be Wed. Jan. 13, at 11:00 a.m. at the funeral home, with burial in Souder Cemetery in Ozark County. In lieu of flowers, donations may be made to the Fair Haven Children’s Home.