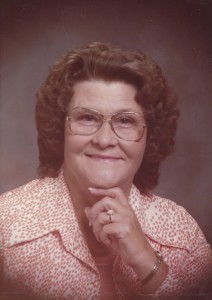 Phyllis “Darlene” Johnson, 83, departed this life and went home to be with her Heavenly Father on June 11, 2015. She was born in Bruner, Missouri on April 29, 1932 to Cecil Hadley and Alma Mae McHaffie. She married Alvin Elwood Johnson on April 1, 1948. They were married for 64 years. During this union, they had four children together. Carolyn Blankenship and husband Ron of Sparta, Phyllis McQueen and husband Ted of Springfield, Roy Johnson of Springfield, & and infant son David Allen Johnson. She was a longstanding member of the Galloway Baptist Church. She spent most of her life as a homemaker, taking care of her children, grandchildren, and great-grandchildren.
She was survived by her brother Bill McHaffie and wife Romaine of Rogersville, sister Pat Johnson and husband Lloyd of Sparta, sister Violet Roller and husband Wesley of Sparta, 7 grandchildren, 13 great-grandchildren, and 4 great-great-grandchildren and many, many more family and friends.
She is preceded in death by her parents Cecil Hadley and Alma Mae McHaffie, her husband Alvin Elwood Johnson, an infant son David Allen Johnson, granddaughter Joyce Darlene Blankenship, grandson William Gabler, sister Mary Detta McHaffie, brother Gene McHaffie, brother Jim McHaffie, and brother Joe McHaffie.
Romans 14:8 “For if we live, we live to the Lord, and if we die, we die to the Lord. So then, whether we live or whether we die, we are the Lord’s.” She was a wonderful, wife, mother, and nanny; she will be missed by all who knew her.
Services for Darlene will be at 10:00 A.M. Monday, June 15, 2015 at Greenlawn Funeral Home East. Burial will follow at Temple Hill Cemetery near Bruner, Missouri.