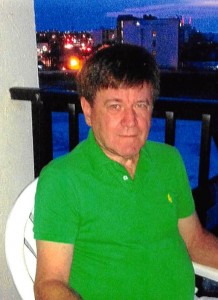 Randy Wayne Bollinger, age 68, departed this earth on August 23, 2015, after a bravely fought battle against leukemia. From his birth in Springfield, on November 30, 1946, to the day he passed away, Randy was devoted to his family and friends and was known to all as a caring and kind man.
Born to John Bollinger and Leona Matthews, Randy attended elementary through Central High School, all in Springfield, Missouri. Following school, he was a warehouse and maintenance worker at the Solo Cup factory, all the while a housing contractor in the time between his 10 hour shifts at the plant. He retired in January of 2012 and spent his days traveling with his beloved wife and entertaining his grandson, Jude.
On October 26, 1985, Randy married the love of his life, Audria (Helms) and together they shared 29 plus happy years of marriage.
Randy is preceded in death by his father and mother.
Left to honor Randy and remember his love and light is his wife, Audria, his step-son, Jason Hume (Samantha), and a grandson, Jude Kramer-Hume. Randy is also survived by two children and five grandchildren, stepmother Wilma Bollinger and half sister Debbie Creed.
Randy will be remembered by those who knew him for his sense of humor and style, his fondness for the Braves (much to the dismay of his grandson, Jude), and his work ethic.
Visitation services will be held Wednesday, August 26th, from 6 to 8 pm at Greenlawn East in Springfield. Funeral services will be held Thursday, August 27th, at 1 pm at Greenlawn East with burial to follow at Rivermonte.
Memorial contributions may be left for the family at Greenlawn East or made to your favorite charity in Randy’s memory.