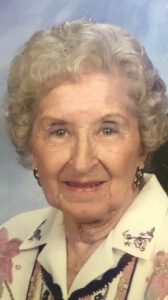 Reba Louise Dean, age 91, passed peacefully on July 23, 2016, after a brief struggle with age-related health issues. Reba was born March 2, 1925, in Conway, Missouri, the daughter of Clarence Augustus and Jesse Irene Abbott. She was preceded in death by her husband of 70 years, Louis Jefferson Dean.
Reba followed Lou to many places during his military career, raising their 4 children in several duty stations, in the United States and Europe. They resided in such places as Albuquerque, New Mexico, Sacramento, California, Wichita, Kansas, Portsmouth, New Hampshire, and Frankfurt, West Germany. Though this lifestyle had its excitement and adventures, Reba and Lou were thankful to return to their home in the Ozarks after 24 years on the road.
Reba and Lou both graduated from high school in Seligman, Missouri. They were high school sweethearts who made the decision to marry when Lou was drafted into the Army in World War II. Both have attended reunions at their alma mater over the years, and enjoyed staying in touch with their Ozark roots. After Lou retired in 1967, they chose Springfield as their permanent home and lived in the same house throughout their retirement years.
Reba is survived by her four children, Penny Conrad Wagner, Jeffery Alan, Robert Louis, all of Springfield, and Steven Jay of Nashville Tennessee. They witness the birth of 11 grandchildren, and 13 great grandchildren. All will miss her dearly.
Reba was a member of University Heights Baptist Church for 49 years and saw the church grow to meet the spiritual needs of their congregation. She will be missed by family, friends, and her church family. Visitation will be on Wednesday, July 27, 2016 from 6:00 to 8:00 p.m. in Greenlawn Funeral Home South, 441 West Battlefield Springfield, Missouri 65807. Funeral service will be on Thursday, July 28, 2016 at 10:00 a.m. in the funeral home with burial following in Hazelwood Cemetery.