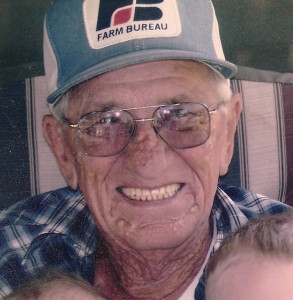 Relfe Spaulding “Bus” Elayer was born on October 2, 1926 to parents Jefferson Welch and Effie (Lee) Elayer in Patterson, MO. He died in his sleep on March 15, 2016 at home in Springfield, MO. Bus joined the Navy and fought under Admiral “Bull” Halsey’s Pacific Campaign in WWII. Time has claimed another member of “the Greatest Generation.” When he first traveled to Springfield, he fell in love with the city and surrounding lakes and he knew that is where he wanted to spend his life. He established St. Louis Street Auto Body and owned and operated it for thirty years. After retirement he spent his time, fishing, gardening and socializing with family and friends at his home on Tablerock Lake. After the death of his second wife Margaret he moved in with his son Larry and daughter-in-law Glenda in Springfield, MO. These last five years have been very precious to our family. Bus was preceded in death by his first wife Lenore (Tourville) Elayer in 1985, his second wife Margaret Elayer in 2009, his parents, two brothers Vernon and Maurice, one sister Dorothy Twidell, and one great grandson, Nate Killingsworth. Bus is survived by his only son Larry and Daughter-in-law Glenda; two sisters, Alice Jo Bennett and Mary Ellen Yancey of Arizona; one brother Kenneth of Arizona; one foster sister Ada Segall, of St. Louis; four granddaughters Laura Killingsworth (husband Tom), Sarah Limb (husband Spencer), Elizabeth Womack (husband Jeremy) and Jessica Widger (husband Justin); five great grandchildren, Kaitlyn Killingworth, Ben Killingsworth, Rosie Killingsworth, Connor Womack and Millie Womack; numerous other family and friends. A special thanks to Seasons Hospice for their compassionate care. At Bus’ request, no funeral services will be held and he will be inturned in Greenlawn North Mausoleum. He will be greatly missed.