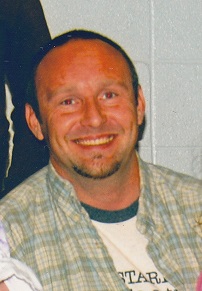 Richard Dale Davis, age 43, of Springfield, MO, passed away Friday, May 13, 2016, at Cox Medical Center South. He was born September 4, 1972, in Springfield, MO, to Jimmy and Verna (Tennis) Davis. Richard challenged his mother to get their G.E.D.’s together, which they did in 1992. He worked for many years as a laborer for the family’s construction company. Richard enjoyed collecting sports memorabilia. He was very involved in rescuing stray animals. Richard will always be remembered for putting other people before himself, actually giving his coat off his back and the shoes off his feet to someone he felt needed them more than he did. His passion of giving will continue as Richard was an organ donor. Richard’s greatest love was his family, he was very proud of all of them, especially his daughters and grandson.
He was preceded in death by his maternal grandparents, Paulie and Oneita Tennis; and one uncle, Ronald Gene King. He is survived by two daughters, Alexandra Moots, Nixa, MO and Haley Davis, Anaconda MT; mother, Verna J. Davis, Springfield, MO; father, Jimmy D. Davis, Springfield, MO; one sister, Susan Cameron and husband Austin, Bolivar, MO; one grandson Aiden Maupin, Nixa, MO; four nephews, Kody, Tyler, Richard Cole, and Kace; two nieces, Kierstin and Carlee; paternal grandmother Opal Hughes; six uncles; eight aunts; twenty-two cousins; and a host of family and friends.
Funeral services will be held at 3:00 pm, Saturday, May 21, 2016, at Greenlawn Funeral Home North, Springfield, MO with Pastor Trent McMain officiating. Burial will follow in Greenlawn Memorial Gardens. Visitation will be held from 7-9 pm on Friday, May 20, 2016 at Greenlawn Funeral Home North. Memorial contributions may be made to the funeral home to help defray funeral expenses. Services have been entrusted to Greenlawn Funeral Home North, Springfield, MO.