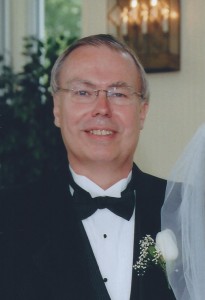 Richard Edmond O’Connell III, 66 Springfield, MO formerly of Jenks, Oklahoma passed away in his home surrounded by family on Dec. 30, 2015. He was born in Marshall, Minnesota on January 6, 1949. He attended Central Catholic High School and graduated in 1967. Richard then attended Notre Dame University and graduated from there in 1971. He was a C.P.A. with Sutherland Global Services and retired in 2011.
He is survived by his son Richard Edmond O’Connell IV and his wife Leslie O’Connell, and daughter Dr. Margaret Zanger and her husband Nicholas Zanger. He is also survived by 4 granddaughters: Erin, Molly, Rosemary O’Connell, and Margaret Zanger. Other survivors include: a brother, Thomas O’Connell and his wife Susan and 3 sisters and their husbands, Peggy & Bill Roush, Betsy & Ray Kasenga, and Mickey & Bruce Erickson. Richard loved cars, football, and reading. He will be deeply missed.
Visitation Rosary will be held from 6-8 P.M. Tuesday, January 5, 2016 in Greenlawn Funeral Home South. Funeral Mass will be held at 10 A.M. Wednesday, January 6, 2016 in Immaculate Conception Catholic Church with burial to follow in Greenlawn Memorial Gardens. In lieu of flowers the family suggests memorials to: Hospice Compassus 1465 E. Primrose – Unit A., Springfield, Mo 65804 or Immaculate Conception Catholic Church 3555 S. Fremont, Springfield, MO 65804.