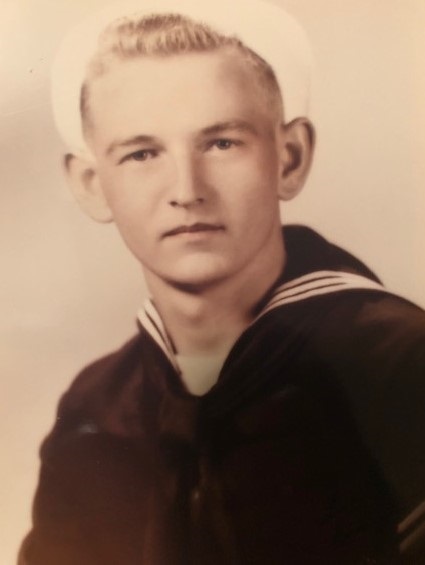 Richard Frank Clayton, 87, of Springfield, MO passed away on April 19, 2019 after a long struggle with COPD. Richard was born on November 1, 1931 in Taneyville, MO. The only child of Fay and Elmer Clayton, he spent most of his early years in Taneyville attending both Taneyville and Forsyth public schools. Richard graduated from Forysth High School in 1950.

Richard was a proud Navy veteran who served his country in the Korean War. He enlisted in the United States Navy in December of 1950 and, after training at Great Lakes Naval Base in Illinois, Richard was stationed in Washington D.C. and Philadelphia before shipping out to Korea in October 1952. He was in Korea until the war ended and spent time in Japan and Vietnam until he was discharged in November 1954.

Upon his return to Taneyville and his discharge from the Navy, he married his high school sweetheart, Martha Baker on December 3, 1954. Richard and Martha dated from their junior year of high school until they were married including the time Richard spent in the Navy. They were blessed with one daughter, Penny Renee Clayton.

Richard spent most of his work career as a welder retiring in 1995. He was a natural mechanic his entire life and loved to work on old cars and motorcycles including a 1940 Ford Coupe that was completed just prior to his death. For many years, he and Martha enjoyed country and ballroom dancing and traveled extensively across the United States.

Richard is survived by his wife of 64 years, Martha, daughter Penny Clayton and her husband Stu Dunlop, his nephew, Scotty (Debbie) Hurst, niece Cindy (Eddie) Johnson, many great nieces and nephews, the family of his favorite uncle Howard Whiteis, and his good friend, Dale Wrenn. He was preceded in death by his parents, Fay and Elmer Clayton.
Services for Clayton will be a graveside service in Greenlawn Memorial Gardens at 2:00 pm on Monday, April 22, 2019