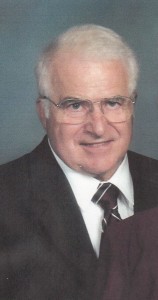 Richard Gene Stober, 76 of Springfield, Missouri peacefully passed away from Parkinson’s disease at his home on December 15, 2014. Born on September 26, 1938 in Davis County, Gene graduated from Davis County High School and lived most of his life in Bloomfield, IA. Gene married Beverly Jean Speer on April 5, 1958. In 1956 Gene began his 42 year business career working and later co-owning Bloomfield Lumber. Gene is survived by his wife Beverly who lovingly cared for him for the past 13 years, his brother James and wife Judy (Nixa, MO), daughter Jane Ann Redding and husband Michael Redding (Daytona Beach, FL), son Danny Stober and wife Kim Stober (Springfield, MO), six grandchildren, Calvin Redding, Kyle Redding, Ryan Stober, Alyssa Stober, Evan Stober, and Gabrielle Redding, three great grandchildren Natalie Redding, Sydney Redding, and Avery Redding.
Funeral services will be held Thursday, December 18th at 2:00pm at Greenlawn Funeral Home, 3506 N National 65803, 417-833-1111. A visitation will be held prior to the funeral service from 1:00-2:00pm. Memorial donations can be made to High Street Baptist Church (Companions Class), 900 North Eastgate, Springfield, MO 65802.
Gene was a gentle and generous man who was kind to all who knew him. He will be greatly missed.