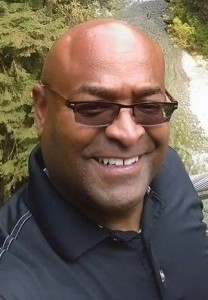 Richard L. Goodwin, 48 passed away unexpectedly Sunday May 29th, 2016 in Keller, Texas. Richard was born in Clinton, MO to Joan Goodwin and Eldridge (Dick) Goodwin. He was a longtime employee for BNSF Railway and at the time of his death, he was the terminal manager in Dallas/Ft. Worth, Texas. Rick was a beloved son, brother, uncle, friend, neighbor and employee. Although Rick’s passing was shock to us all, he would want us to celebrate his life. He was an avid lover of all sports, traveling, cooking and bringing people together. He loved spending time with his beloved family.
Richard attended Rountree Elementary, Jarrett Jr. High and graduated from Parkview High School (1986) where he was a 4-year letterman in football. He is an alumni of Missouri State University where he obtained his Bachelors of Science degree in Computer Information Systems; and Washburn University where he obtained a Master’s Degree in Business Administration. His hard work ethic and brilliant mind helped him achieve numerous awards such as Employee of the Year for BNSF.
Those left to mourn his untimely death are his parents Joan Goodwin and Eldridge (Dick) Goodwin, brother Rodrick (Vivian); sisters, Renee Goodwin & Nicole Moore; nephews Landon & Naaman and great-niece, Nevaeh. Special Uncle Raymond Thomas and a host of aunts, uncles, cousins and countless friends.
Rick’s life will be celebrated on Saturday June 11, 2016. Visitation will be held at GreenLawn South Funeral Home from 1-3 and the service will start at 3 p.m.
The family will receive friends from 5-9 p.m. at the Southside Senior Center Place at 2215 S. Fremont Avenue, Springfield, MO after the service. In lieu of flowers, contributions for a memorial bench can be made at the funeral home.