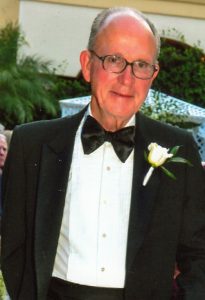 Richard Lee Moses was born on a farm in Franklin County, KS on December 26, 1939, the son of John W. Moses and Marie (Geiss) Moses. He was married to Elaine Kingery on February 7, 1958, and they had four sons: Bill, Rick, Ray, and Ron. He graduated from Appanoose High School, Baptist Bible College, Drury University, and Central Missouri State University. He served on the Springfield Police Department from March 1961-October 1981, retiring as a Major. Elaine and he established Road Runner Party Sales, a wholesale distributor of Tupperware Products, in Joplin, MO after his retirement from the SPD. He married Arlene Clouse on November 25, 1988. They continued in the Tupperware business until March 1992. He worked 13 years for the Joplin Public Schools as attendance/security officer, retiring in June, 2006. From October 2006 until February 2013, he worked as a bailiff in the Circuit Courts in Springfield. He was preceded in death by his parents, his first wife, Elaine, one son, Bill Moses, and one brother, Raymond. He is survived by his wife, Arlene, three sons; Rick, Ray, and Ron (Michelle) Moses, daughter-in-law, Carolyn. Richard is also survived by 14 grandchildren, and 8 great-grandchildren. Visitation will be Saturday, August 27, 2016, 1:00-2:00pm, at Greenlawn Funeral Home North. A Memorial Service will follow at 2:00pm, also at Greenlawn North. In lieu of flowers, donations may be made to the American Cancer Society.