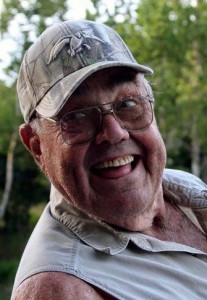 Robert Allen Wilson, 86, of Springfield Missouri passed away peacefully on Wednesday, December 9, 2015 at Mercy Hospital Springfield with his loving family present. He was born in Chickasaw County, Houston, Mississippi to Daniel and Katie Wilson. Bob (as he was known to friends and family) had thirteen siblings, six brothers and seven sisters. The whole family lived on a cotton farm in Houston, Mississippi where they all pitched in and lived as sharecroppers. All hands were needed to work the farm, so Bob was not able to finish his high school education before he joined the United States Navy at the early age of nineteen. Studying nights and every free moment, Bob quickly excelled, finished his high school diploma and advanced through the 8 enlisted ranks and promoted to the Officer ranks finally retiring as a Lieutenant Commander. Bob served on many US Navy ships and found his niche as an expert in Naval ship engine maintenance and repairs. Over the course of his 25 year Navy career, Lieutenant Commander Wilson, a pillar of a man at 6 feet 5 inches tall, was heavily relied upon to ensure the fitness of our US Naval fleet. Bob fell in love and was married 46 years to his sweetheart, Darlene Hedgpeth who survives him and is a Springfield native. Once Bob retired from the US Navy in 1973, he and Darlene moved back to Springfield where Bob pursued and finished his college degree in Industrial Arts at Southwest Missouri State University. Bob taught high school at the R-1 School District in Buffalo, Missouri. Bob was very active in the Ozark Empire Navy Fleet Reserve managing and helping to build their club house in downtown Springfield. Bob cooked the Saturday breakfasts and ran the bingo nights at the club. He never lost his farming roots and grew a huge vegetable garden every year. He was famous for his home canned tomato juice right from his garden tomatoes and he claimed it was best drank with vodka as a Bloody Mary. Bob was so proud of his flourishing garden that many times he would fill up a few boxes of his home grown vegetables, drive to the local food store parking lot to give his produce away to any passer by that would talk to him. Most of all, Bob loved his family. Every summer in June Bob would plan, organize and host the legendary family Reunion at Table Rock Lake. Always featured were his home grown garden vegetables, and of course huge breakfasts with biscuits and gravy all of which he cooked himself. He was a hard working man with a strong work ethic. Bob was a highly skilled jack of all trades and as an entrepreneur, he started his own Handyman business, fixing, building, and repairing any and everything when called upon. He never passed up an opportunity to tell a story. If you asked Bob a question, and he didn’t know the answer, well he would just make one up…and usually he was right. As far as american football goes…there wasn’t a team or statistic Bob didn’t know and couldn’t recite on the spot. The family would like to extend special acknowledgment for the wonderful care and quality of life support Bob received from his health care professionals. They include: Primary care, Dr. Reinbolt, MD; Dr. Andrew L. Evens, MD; Dr. Mark H. Grimm, MD; Dr. Robert D. Johnson, MD;Dr. Albert R. Leonardo Jr. MD; and Nurse Practitioner Kim R. Edson. Also we are very grateful for the wonder staff at Mercy Hospital especially Mercy Hospice and Nurse Amy. Bob is survived by his loving wife, Darlene Wilson, son, Richard Wilson and his wife Yvette Ellard, Daughter, Cynthia Wilson, Daughter, Sandra Fowler and her husband Jeff Fowler and Grandchildren, Gwendolyn Cook, Jeffery Fowler, Zachary Wilson, May Wilson, Anne Ortiz, Stephanie Wilson, and Ben Wilson. Bob is also survived by 6 Great-grandchildren, Dallas, Savannah, Sedona, Raul, Olive, and Jaden.
Graveside service with full Military Honors will be held at 10:00 A.M. Wednesday, December 16, 2015 at Missouri Veterans Cemetery.