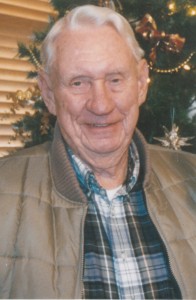 Robert “Bob” Archie Henry III, 84, passed away on Wednesday, November 19, 2014 in Springfield, Missouri. He was born on February 14, 1930 in San Bernardino, California. to Robert Archie Henry II and Bonnie Ruth (Callico) Henry. He married Myrtice Rushing on June 24, 1949 and she survives.
Bob and Myrt owned and operated a dairy farm in San Bernardino, California and then in 1969 they moved the operation of the dairy farm to Conway, Missouri. Bob and Myrt owned a music store in Springfield and Lebanon, Missouri for about 20 years. He enjoyed playing the piano and organ. Bob loved his ponies, and enjoyed driving from California to Missouri and back several times a year. Bob played the organ in the 1st Baptist Church in Conway, Missouri.
Bob was preceded in death by his parents, one son: Robert Archie Henry IV, son in law: Darrel Fair.
Survivors include his loving wife of 65 years: Myrtice, son: Kenny and Angie Henry: daughters: Susan Fair, and Karen Harper, brother: James Henry, Sister: Ruth Joy Brown, five grandchildren: Tracey Stokes, Danny Mann, Stephanie Tscherny, Courtney Dameron, Levi Henry, and seven great-grandchildren.
Visitation will be on Saturday, November 22, 2014 from 2:00 pm until 3:00 pm at Greenlawn Funeral Home, North Chapel.
Graveside Service will be at 3:30 pm at Greenlawn Memorial Chapel, with a Horse Drawn Carriage.
In lieu of flowers the family has requested memorial donations to be made in Bob’s name to Gideon Bibles.