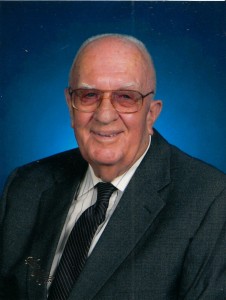 Robert B. Kent passed away on April 9, 2016 at Mercy Hospital, Springfield, Missouri after a short illness.
Robert was born in Greene City, Missouri to Errett and Mildred Kent on February 12, 1922. He was married to Jauneita Shultz on May 27, 1941.
Robert is preceded in death by his wife Jauneita, his parents, Errett and Mildred, and his sister, Betty Jean.
Robert is survived by his son, Larry Kent, his daughter, Janet Moore, 4 grandchildren; Kurtis, Brian, Patrick, and Chris. He had 6 great-grandchildren and 1 great great-grandchild.
Robert was a farmer in his younger days in Unionville, Missouri. They moved to Springfield, Missouri in 1954 and he became a milk hauler for MFA and then an over-the-road, independent truck driver. He retired at the age of 60. After retirement, he took great pride in his home and enjoyed yard work and his flowers. They travelled taking senior bus tours all over the country. In his later years, he enjoyed TV…especially his westerns and NBA basketball games.
Funeral services will be Tuesday, April 12, 2016, 10:00am, at Greenlawn Funeral Home North. There will be no visitation.