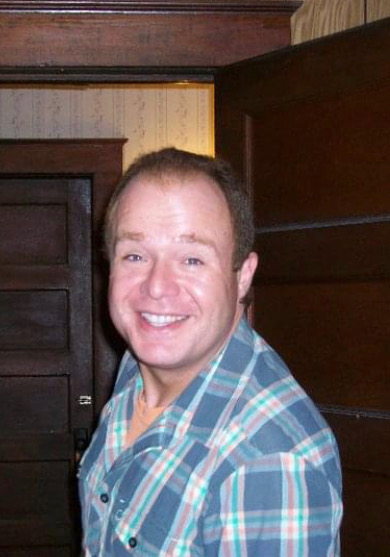 Robert Benjamin Ferguson was born on September 14, 1974 in a Navy hospital in Norfolk, Virginia.  His home, however, was southwest Missouri, where he spent his life.  On April 22, 2020, he lost his courageously fought battle with lung cancer.  He was surrounded by his family.

Robert was a beloved son, brother, grandson, nephew, and friend.  He was sometimes reluctant to meet new people, but swiftly charmed everyone he encountered.  He was quick with a joke, and enjoyed nothing more than making people laugh.  He loved music, film, and theatre – and never missed a chance to entertain.  He was an animated storyteller, whether he was delivering a hilarious reenactment of a memorable encounter or a vivid description of a mouthwatering meal.

Robert loved his family.  He was a loyal friend.  His life was not without challenges – he knew the spectrum of human emotion in a way that few others ever experience – but those challenges made him quick to show compassion, gratitude, and love for others.  He didn’t believe in leaving things unsaid, and never passed up the opportunity to tell his loved ones how much they meant to him.  He was loved by so many, and loved fiercely in return.

He is survived by his parents, Bill and Sandi Ferguson, his sisters Rhonda Ferguson and Rachel (Jason) Knight, as well as many aunts, uncles, cousins, and countless friends.  Robert was preceded in death by all of his grandparents, an uncle, and many others who were dear to him.

A celebration of Robert’s life will be held when it is possible for his loved ones to gather.  Memorial gifts can be made to the American Cancer Society or Springfield Little Theatre.