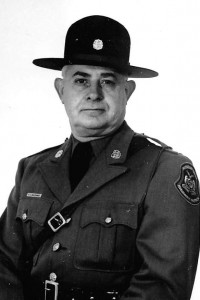 Robert Earl Swackhamer July 23, 1915 – May 17, 2015
Robert was born as the fourth of five children to Tom and Mary Swackhamer on a farm four miles southwest of Urich, MO. He went to a one room school house and graduated from Urich High School in 1933 where he was one of 12 graduates. After a brief career in farming, he joined the USMC in 1937, with an initial assignment with the Marine detachment aboard the USS Chester. During his nine years as a Marine, he held every rank between Private and First Lieutenant, First Sergeant and Master Gunner included. On December 7th, 1941 he was Sergeant of the Guard with Co. A, 2nd Tank Battalion in Reykjavik, Iceland. After completion of Officer Candidate School at Quantico VA he was assigned to various USMC units in the San Diego CA area and eventually Company A 5th Tank Battalion in which he served on Iwo Jima landing in the third wave. The end of hostilities found him in Hawaii preparing for the invasion of Japan. Following brief service in occupied Japan, he left the Marines in 1946 to join the Missouri State Highway Patrol. After several years of road duty he was promoted to sergeant at Troop F. In 1961 he was promoted to Lieutenant as the Patrol’s lead auto theft investigator. The year 1968 saw him promoted to Captain in command of Troop D. After 29 years of service, he retired in 1975. In retirement he served for a time as the interim director of the Good Samaritan Boys Ranch and later as a bailiff in the Greene County Court System.
He was married on Feb 27, 1948 to Mildred B. Johnson in Marshall, MO, with the Rev. Dr. T. Cecil Swackhamer officiating. He was preceded in death by his parents, his brothers T.C. and O. Cletus Swackhamer and sisters Naomi Hupp and Mary Ferne McDonald. He is survived by Mildred, his wife of 67 years, sons Robert L. Swackhamer of Toms River, NJ and Thomas E. Swackhamer of Flower Mound, TX, grandchildren Brian K. Swackhamer, Elizabeth A. Swackhamer and Robert W. Swackhamer plus numerous nieces and nephews.
Memorial service will be 10:00 a.m. Thursday, May 21, 2015 at Greenlawn Funeral Home East with Rev. Lori Lampert officiating. A visitation will be Wednesday from 6:00 – 8:00 p.m. at the funeral home. Burial will be at Missouri Veterans Cemetery.
Contributions may be made to:
Wesley United Methodist Church
St. Paul Campus
413 E Walnut St,
Springfield, MO 65806