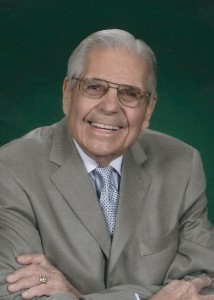 Robert G. Killian went to be with the Lord at 12:22 a.m., Sunday, November 15th, 2015, while surrounded by his immediate family. Bob was born to Paul and Grace (Williams) Killian on December 14th, 1921 in Seymour Missouri, and with his family moved to Springfield four years later. After graduating from Central High School in 1939, he voluntarily joined the service and after basic training Bob entered an anti-aircraft unit of the National Guard where he spent time in Alaska in the Aleutian Islands. After retraining for the infantry in the United States Army at Camp Grueber, Oklahoma, Bob spent 9 months of active combat duty while in Europe. Bob was part of the 42nd Rainbow Division, and while serving in Germany in late April, 1945, was in the first detail to enter and liberate the Dachau concentration camp, rescuing 15,000 prisoners. During his military service, he was awarded the Combat Rifleman Badge, two Bronze Star Medals and four Battle Star Medals. After being honorably discharged at the rank of Sergeant in 1945, he returned to Springfield. Bob worked his way to district circulation manager for the Springfield Newsleader newspaper, supervising routes with 14 carriers. The following year he met his future wife, Betty Hawkins of Bolivar MO, on a blind date on Halloween night in 1946. Five months later on March 10th, 1947, Bob and Betty were married in a Baptist Minister’s home in Kansas City, Kansas.
In 1948, Bob, his father J.P. Killian, and brother, Bill Killian, founded Killian Construction Company. In 1959 Bob and Betty purchased the construction company from Bob’s father. As president, he successfully led the company’s growth while building over 1500 residential homes in the Springfield area. In 1970 Bob transitioned Killian Construction Co. to primarily commercial construction. All of three sons have been involved in the family business over the years, but in 1992, their son, Bill, purchased the business from Bob and Joe. Bob continued for many years as a general partner in Springfield Development Company along with his son, Joe, where they were involved in several business ventures and investments in industrial, commercial and multi-family properties in the Springfield area.
Bob was a charter member and a past President of the Springfield Home Builders Association, and served as an officer of the Springfield Contractors Association. He also served as Trustee and chairman of the deacons at Victory Baptist Church in its formative years. In 1996 Bob became a charter member of the Southwest Baptist University Board of Regents. In 1999 Bob was appointed by the Missouri Baptist Convention to serve on its Board of Trustees. On August 22nd, 2001, Bob received an “Honorary Doctorate of Business Administration” from Southwest Baptist University. Bob gave charitably to academic and other institutions and organizations including, Mercy Hospital, Southwest Baptist University, Drury University, and First Baptist Church, among many others. Bob enjoyed spending time with his family, traveling the world and the U.S. and Canada in their motorhome, winters at their home in Arizona, and his Tibetan Spaniel Sam.
Bob was preceded in death by his father, J.P. Killian, mother, Grace (Williams) Killian, brother, Bill Killian, sister, Geraldine Erb, and son, Roger G. Killian. He is survived by the love of his life and wife of 68 years, Betty Killian, sister, Maureen Wilson, son, Joseph P. Killian (Carol}, son William F. Killian (Lisa}, granddaughter, Lindsey Huffman (Brad). granddaughter Lana Killian (SPC Alexander Stevenson), granddaughter, Christina Killian, grandson, Nicholas Killian, great granddaughters, Reece and Reagan Huffman, several nieces and nephews and extended family, all of whom loved him dearly.
The visitation for Bob will be at Greenlawn Funeral Home East on Friday November 20th from 5:30-7:30 p.m., and the funeral service will be at First Baptist Church Saturday, November 21st, 2015, at 2:00 p.m. He will be laid to rest at Hazelwood cemetery with veteran military honors.
In lieu of flowers, memorial contributions may be made to the Burn Unit at Mercy Hospital in Springfield, Missouri.