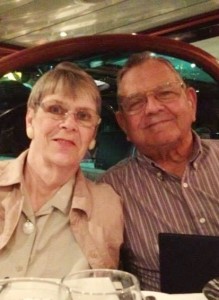 Robert Gerald “Tex” Barnes, 80, went home to be with his Lord and Savior April 30, 2016 following a brief illness.
Robert was born on October 5, 1935 in Waco, TX to Harvey Franklin and Nellie Delia (Mullins) Barnes. After high school, he joined the Air Force and while stationed at a radar site for national defense in Fordland, MO, he met his wife, Vera Brazeal at the Ozark Jubilee in Springfield, MO. They married in 1959 and in the years to come they were blessed with their three children.
Robert went to work for Sechler Electric in 1961 and stayed with the company for 41 years. He was a member of Dale Street Baptist Church for 47 years where he served as youth pastor, bus driver, trustee, deacon, and he was the music minister for 40 years. He was always willing to serve in whatever capacity the Lord would have him serve. At the time of his death he was serving the Lord at Baptist Temple, Springfield, MO.
He was preceded in death by his parents; brothers, James and wife Marie, Lofton and wife Dolly, William and Leo Barnes; sister Nell Bennett and husband Wayne; father and mother-in- law Earl and Ruby Brazeal; sister-in-law Pauline Williams; brother-in-law Steve Crabtree; nephews James and Stephen Barnes, Mark and John Williams, John Scroggins, George Downing; nieces Debra and Mary Ann Williams, Sheila Green.
He leaves his wife of almost 57 years Vera (Brazeal) Barnes; daughter Cheryl Ann Barnett and husband, Jeff, Willard, MO; son Tim Barnes and wife, Donna, Springfield, MO; daughter Caryn Berry and husband, Michael, Springfield, MO; five granddaughters, Molly, Merry, and Maggie Barnett; Jennifer and Sara Barnes, and one grandson, Isaac Berry. He is also survived by three sisters, Ruby Wright, Lorena, TX, Delores Busch and husband Ed, Waco, TX, and Virginia Dollar and husband Tommy, West, TX. Robert considered Vera’s family as his own and is also survived by Vera’s sister Nadean Green and husband Oran, Springfield, MO; brother Wayne Brazeal and wife Carolyn, Billings, MO; and sister Evelyn Crabtree, Strafford, MO, and many nieces and nephews as well as a host of friends.
His family was his pride and joy and he was never happier than when he was spending time with his wife, kids, and grandkids.
Visitation will be Tuesday, May 3, 2016, from 6:00 to 8:00 p.m. and the funeral will be Wednesday, May 4, 2016 at 10:00 a.m., both at Greenlawn Funeral Home East in Springfield, Missouri. Burial will be in Greenlawn Memorial Garden with full military honors. In lieu of flowers, donations may be made to the Baptist Temple Youth Van Fund, 2655 N. Grant Ave, Springfield, MO 65803