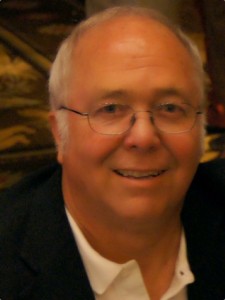 Robert J. Cave, 67, passed from this life on October 15, 2015 after a long illness. He was a fun-loving and generous spirit, a cherished and loyal friend, a delightful storyteller, an avid softball player and a fan of westerns, Thanksgiving and the Fourth of July. He was a businessman, a United States Marine, a Vietnam Veteran and a proud member of the Parkview High School Class of 1966, aka “The Best Class Ever.” He was a beloved son, brother, father, grandfather, husband and cousin. From now on, he can watch his grandchildren dance and sing and play sports from the best seat in the house.
Bob was a lifelong resident of Springfield, Missouri. He worked for the family business, Cave Carburetor Exchange, until his retirement. He also managed Cave Engines and Parts in Columbia, Missouri for many years.
Bobby was preceded in death by his parents James and Mary Lou Cave, his sister Dona, and his grandparents Willard (Mae) Cave and Clyde (Nell) Schmittou. He leaves behind his wife Diana “DD”, sister Connie, daughter Shelly (George) Pattison, son Brian (Marcie) Cave, grandsons Cory (Lauren) Coomer, Cooper and Owen Cave, great-granddaughter Kealey “Baby” Coomer, step-children Gregory Swift and Stephanie (Matt) Gehrig, step-grandchildren Jordan and Thomas Gehrig, his cats Festus and Dolly, many cousins and a wealth of friends.
To honor Robert, please extend a helping hand to others by contributing to a veteran’s organization, Toys for Tots, The Children’s Miracle Network or The Ozarks Food Harvest.
Visitation will be held at Greenlawn South Funeral Home on Monday, October 19 from 6 to 8 pm, preceded by a Rosary at 5:45 pm. Funeral Services are scheduled for 10 am Tuesday, October 20 at Immaculate Conception Church. Burial with full military honors will follow at Highlandville Cemetery.
Semper Fi, Robert Cave. Thanks for the wonderful memories. We love you to Heaven and back.