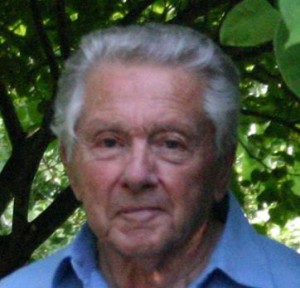 Robert “R.K.” Kelly Martin walked gently into the Hands of The Lord Jesus on May 8, 2015 from Springfield, MO. He was born near Elm, MO (Johnson County) on August 18, 1924 to Ola Francis and Ivan Martin. He is remembered as a kind and gentle husband, father, grandfather and friend. As a teen R.K. had early responsibilities on the farm after his young mother passed away. Following high school he entered the Army’s 101st Airborne Division during WW II. Trained as a paratrooper and an explosives specialist he was an active participant in the conflict at Normandy, France, June 1944. Following injury he was awarded the Purple Heart and Bronze Star. After the war he became a skilled craftsman with the International Heat & Frost Insulators, Local 27, Kansas City. Retiring in 1987, his primary hobby became oil painting. He also enjoyed gardening and woodworking. He was preceded in death by his first wife, Mildred Martin of Independence, MO and eldest son, Richard Martin, Harrisonville, MO. R.K. is survived by his wife Judy Martin of Springfield, MO and two sons, Bruce Martin of Nixa, MO and, Keith Martin of Houston, TX. Other survivors include siblings Ed Martin, David Martin, Marilyn Owen, John Martin, Mary Fulkerson, Donna Wesley and Julia Kerr. He is also survived by several grandchildren and great-grandchildren. Visitation at 1 P.M., Services at 2 P.M, Friday May 15, Nixa Christian Church, 400 Northview Rd, Nixa, MO. Burial in Greenlawn Cemetery. Donations to the church are suggested in lieu of flowers.