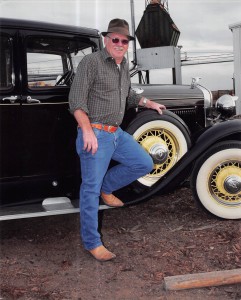 Robert Lewis Enyart, age 73, of Pleasant Hope, MO, passed away Sunday, February 14, 2016 in his home. He was born February 24, 1942, in Polk County, to Virgil and Eva (Sullivan) Enyart. He was a member of the Southern Hills Baptist Church, Bolivar, MO. He was active in three car clubs; Heart Of The Ozark’s Model T Club, Southwest Missouri Model A Club and Heartland Cruisers. He was a retired school bus driver for Pleasant Hope Schools.
He was preceded in death by parents, his step-daughter and son-in-law Melissa and Steven Cozad and his father-in-law; Travis Mayfield. He is survived by his wife of 44 years, Verdonna Enyart, his daughter Kimberly Cunningham, and husband Jeffrey, one son; Jody Enyart, and friend; Alaina, step-son; Tracy Self, and his wife; Gina two brothers; Jerry Enyart, and his wife Koreena and Larry Enyart and his wife Doni, nine grandchildren and seven great-grandchildren, and his mother-in-law; Maxine Mayfield Reed.
Funeral services will be held at 10:00 a.m. Friday, February 19, 2016 in Greenlawn Funeral Home North, with Rev. Vaughan Weatherford officiating Burial will follow in Pleasant Hope Cemetery. Visitation will be held from 6:00 to 8:00 p.m. Thursday evening in the funeral home. In lieu of flowers, Memorial contributions may be made to the Mercy Children’s Hospital. Services have been entrusted to Greenlawn Funeral Home North, Springfield, MO. Online condolences may be made at www.greenlawnfuneralhome.com.