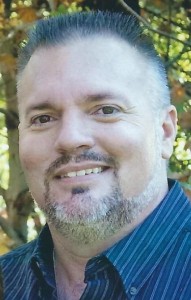 Robert Matthew O’Dell, 47, passed away at his home in Fair Grove, MO on July 12, 2016.
Rob was born May 3, 1969 in Springfield, Mo to Robert Mac and Marilyn (Hardecke) O’Dell.
Rob attended Hillcrest High School and furthered his education at Missouri State University, with a degree in Restaurant and Hospitality. Most of his career, he worked in food related jobs.
Rob was led to the Lord by his Mother at an early age. He is a member of High Street Baptist Church. He was also a member of Solomon Masonic Lodge #271, Springfield, MO.
Rob loved the cars he owned through the years and always kept them spotless. One year ago, he purchased his first Harley Davidson motorcycle and had spent the last year enjoying charity rides and riding with friends and family. Rob was a 4th generation O’Dell Harley Davidson rider.
Rob enjoyed anything to do outdoors, but especially he enjoyed the many guns he had. He, Jerrin and his Dad spent many hours shooting together.
Preceding him in death were his paternal grandparents Randy and Margaret O’Dell and Maternal Grandparents Warren and Mabel Hardecke. His Aunt Sharon (Tay) Hardecke also preceded him in death last year along with his cousin Dustin Hardecke in 2011.
Suvivors include his daughter Jerrin L. O’Dell, Rogersville, MO, his parents and his brother Mark (Adele) O’Dell both of Springfield, MO. His aunt, Jody (Riley) Asher, Ozark, MO, uncle Howard (Sherrie) Hardecke, Springfield, MO, cousins Dr. Andrew (Sofiya) Asher and son Alex, Bloomington, IN, Clint (Angela) Hardecke and sons Noah and Wyatt of Bella Vista, AR and Aleesha (Tyler) Perry, son Micah and daughter Savannah of Ozark, MO.
Rob will be missed very much. He was loved by many and is now at home with his heavenly father.
Services for Rob will be at 11:00 A.M. Tuesday, July 19, 2016 at Greenlawn Funeral Home East with interment following in Greenlawn Memorial Gardens. Visitation will be from 6:00 to 8:00 P.M. Monday, July 18, 2016 in the funeral home.
Contributions may be made to Missouri Bikers Against Child Abuse P.O. Box 300079 Kansas City, MO 64130