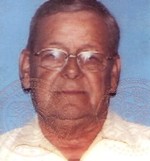 Mr. Robert “Bob” Wolfe, age 71 of Urbana, MO, passed away Saturday, August 22, 2009, in the Cox Medical Center South, Springfield, MO. He was born June 17, 1938, in Kansas City, MO, to Luther and Helen (Booth) Wolfe. He is a US Navy Viet Nam War Veteran. He is a retired State Fire Marshall and Firefighter of over 25 years, a member of the Eagles Post #4010 of Louisburg, and of the Am Vets Post #114 of Flemington, MO. He was united in marriage to Karen Hennessy Singleton February 29, 1996.
His parents and one sister Faye Wolfe precede him in death.
He is survived by his wife Karen of the home; two sons: Robert W. Wolfe, Jr. of Ottowa, KS, and Jim Wolfe of Encinita, CA; six daughters: Teresa Reeves of Louisburg, KS, Judy Collette of Louisburg, KS, Dana Singleton of Urbana, MO, Theresa Singleton of Kansas City, MO, Rhonda Howard of Raymore, MO, and Mary Wolfe of Kansas City, MO; one sister Helen Jansen of Kansas City, KS; 17 grandchildren and two great grandchildren; his beloved Chiquita; several nieces and nephews; as well as many other family and friends.
According to Robert’s wishes his body will be cremated. Private family services will be held at a later date. Friends and family may sign a guest book or send private condolences at: www.greenlawnfuneralhome.com. Arrangements have been entrusted to Pitts Chapel of Greenlawn Funeral Homes Bolivar, MO.