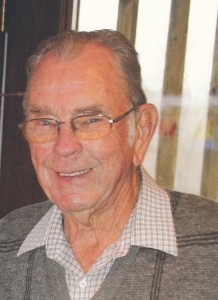 Ronald Leo Derks, age 81, of Springfield, MO, passed away Sunday, June 14, 2015 at Cox Medical Center South. He was born August 19, 1933, in Arrol, MO, to Darrel and Gena (Butcher) Derks. He served in the United States Army. Ron was a successful businessman, being a sales manager for Falstaff Beer, owning a convenience store north of Springfield, and a resort on Table Rock Lake, and retiring as the Clever Postmaster. Ron enjoyed fishing, boating, scratcher tickets, going to the casino with Eva Lou, but his greatest love was spending time with his family. He was preceded in death by his wife, Betty Derks; parents Darrel and Gena Derks; three sons, Robert, Terry and Randy Plaster; and one brother, Gary Derks. He is survived by four children, Forrest Derks and wife Janean, Marshfield, Randy Derks and wife Karen, Tunas, Debbie Plaster, Springfield, and Leslie Chrystal and husband Bob, Nixa; thirteen grandchildren; sixteen great-grandchildren; one sister, Marlene Davis, Springfield; his companion, Eva Lou Morrison, Springfield; and a host of family and friends. Funeral services will be held at 10:00 a.m., Thursday, June 18, 2015, at Greenlawn Funeral Home North, Springfield, MO. Burial will be held in Wise Hill Cemetery, Clever, MO. Visitation will be held from 6-8 p.m. on Wednesday, June 17, 2015 at Greenlawn Funeral Home North. Services have been entrusted to Greenlawn Funeral Home North, Springfield, MO.