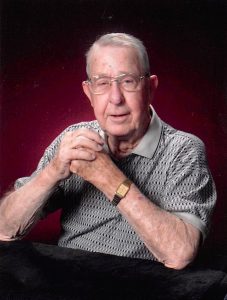 Roscoe C. Self, 95, passed away peacefully after a short illness at Jordan Creek Nursing Home on Sunday, September 4, 2016. He was born July 13, 1921 to Charley and Retie Self near Tin Town, Missouri.
He was a Veteran of World War II earning the Philippine Liberation Ribbon and Bronze Star. He served with the 8th Cavalry in the Philippines and Occupied Japan where he groomed and rode some of Emperor Hirohito’s horses.
Roscoe retired from MSU where he worked as a Security Officer. He was sports enthusiast and a dedicated St. Louis Cardinal fan. He was a lifelong member of First Baptist Church, Springfield, MO.
Roscoe was preceded in death by his parents and nine brothers and sisters. He is survived by his wife of 75 years, Marian (Sisk) Self and three daughters, Carrolyn Arthur (P.J.), Sue Ann Covington (Lon), Jeannine Elliott (Robert); grandchildren, Jim Hayes, Brianna Hayes, Michael Arthur, Samuel Arthur, Michael Trantham, Kyth Trantham, Brent Elliott, and Brandi Houck; and 16 grandchildren.
Graveside services with military honors will be at 11:00 a.m. on Thursday, September 8, 2016 at White Chapel Memorial Cemetery, Springfield, MO. Visitation will be held from 5-7 p.m. on Wednesday September 7, 2016 at Greenlawn Funeral Home South, Springfield, MO. Memorial donations may be made to Preschool Academy, c/o First Baptist Church, 525 South Street, Springfield, MO.