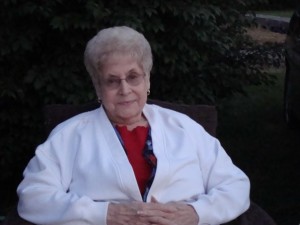 Rosemary Thomas was born to Dale and Mabelle Thomas on November 11, 1934 in Wewoka, Oklahoma.
While attending a church potluck deer supper Rosemary met the love of her life, Lewis Jr. Heiney. On March 6, 1952 Rosemary and Lewis were married in Russell Kansas and began their new life together. Rosemary and Lewis were blessed with three children, Rosalynn Kay, Karen Faye and Gary Paul.
With Lewis, as he supported his family in the oil fields, they lived in Kansas, Nebraska, & Wyoming. 1971 began their life as ministers in the Assemblies of God. She was an awesome asset as a pastor’s wife and help mate, while serving churches in Elkhart, Pleasanton and Osawatomie. Kansas. Rosemary and Lewis retired to Ozark, MO in 1993. Rosemary accumulated many hardships and even more memories in pastoral duties. The greatest hardship was certainly the death of daughter, Karen Faye Heiney in 1976.
While visiting son, Gary and family, a missionary in Venezuela, the dream of a lifetime, seeing the work Gary and family were doing ended with death of her love, Lewis in 1996.
Rosemary was blessed a second time with love, when God sent to her Clyde Stewart. Rosemary and Clyde were married and she spent precious years enjoying life with Clyde. She lost Clyde in 2005 and again was alone.
Rosemary was preceded in death by her parents, Dale and Mabelle Thomas, her only brother, D.A. Thomas, her daughter, Karen, and her husbands, Lewis Heiney and Clyde Stewart.
Rosemary is survived by daughter Rosalynn Handley and Doug of Ozark, MO, her son, Gary Heiney and Patty), of Venezuela; 6 grandchildren and spouses, Carri & Dave Eisenhauer, Tammi and Ryan Creason, Megan Heiney, Mark and Laura Wells, J.D. and Jenny Heiney, and Stacia Handley and Fiancé ,Bryan Anderson. 6 great grandchildren, Tielyr & Kaleb Creason, Asa, Amaria & Aliyah Wells, and Landon Heiney. Rosemary made each child, grandchild, and great grandchild, including those of Clyde Stewart feel special and loved each one dearly; 1 sister in law, Irene Thomas, Overland Park, KS, and many cousins, friends, and “church” children across the United States.
Rosemary attended church at Oak Grove Assembly of God, A faithful servant, when physically able to attend. Rosemary is described by many as the “Proverbs woman”. While rosemary is walking the streets of gold, pain free with family members in heaven that have gone before her , we are left…a multitude of nieces, nephews, cousins and a host of friends here on earth with a gaping hole in our hearts, waiting for the day that we can join her in heaven.
Services for Rosemary will be at 10:00 A.M. Tuesday, July 28, 2015 at Greenlawn Funeral Home East. Visitation will be from 6:00 to 8:00 P.M. Monday, July 27, 2015 at the funeral home. Graveside services will be at 4:00 P.M. Tuesday July 28, 2015 at Pleasanton Cemetery, Pleasanton, Kansas.
Contributions may be made to AGWM Samuels House #7597 1445 North Booneville Springfield, Missouri 65721.