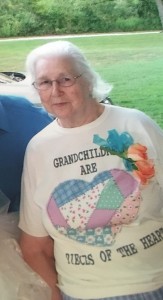 Ruby Jewel (Garrett) Lay left her earthly home during the early morning hours of
Tuesday, June 21, 2016. Her transition to her eternal home was quiet and peaceful.
Ruby left this earth from her bed at the Strafford Care Center which had been her home for the past 8 ½ months. Ruby suffered a severe stroke one day prior to her recent 89th birthday. The past 26 days have been hard as Ruby waited for her heavenly home to be prepared for her homecoming. While Ruby’s earthly family slept, she met Jesus and she was reunited with her parents and beloved husband Billy.
Ruby was born on May 27, 1927 in Butterfield, MO in the home of her parents Frank and Pearl (Terry) Garrett. Two years later she became the sister to Beatrice. Ruby spent the majority of her life in Springfield Mo. She has been a resident of Strafford for the last 12 years.
Ruby was a 1945 graduate of Springfield High School. On May 4, 1947 she married
W.B “Billy” Lay. She and Billy celebrated 59 years of marriage only 2 months before his death in 2006.
On January 16, 1959 Ruby became the mom of Larry Dale Lay and on September 13, 1969 Frank Berry Lay completed their family. Ruby was the grandma to four granddaughters, Alisha, Ashley, Sierra and Hannah and to one grandson, Aaron. Her life was also blessed with 4 great-granddaughters, Alizabeth, Trista, Becca and Aubrey and 2 great-grandsons Kaiden and Kaleb.
Upon moving to Strafford, Ruby joined her family as a member of the First Baptist Church of Strafford. She was faithfully in her favorite seat until her health prohibited her attendance. Previously she was a member of Glidewell Baptist Church for over 45 years.
Ruby was a working mom for many years. She was an employee of Busy Bee in Springfield and later retired from Cox Health after over 2 ½ decades of serving as an admittance clerk . For many years Ruby operated a cake baking and decorating business from her home. She made birthday cakes and wedding cakes for many across the Springfield area.
In addition to her work, Ruby volunteered at Glidewell Baptist Church as she taught SunBeams for many years. She was also a long time volunteer at Baptist Hill Church Camp in Mt. Vernon.
Ruby also supported Billy in his volunteer work with The Willard Lions Club and the Missouri Farm Bureau.
Ruby had a long list of hobbies and favorite past times. Of course they did not include housework or dusting She did love to read, watch old John Wayne and Clint Eastwood movies, and play along with Wheel of Fortune and Jeopardy. She also loved to make beaded and canvas ornaments and enjoyed other handwork projects. When her health allowed she enjoyed spending time at the Strafford Senior Center.
Ruby was preceded in death by her husband Billy, her parents Frank and Pearl Garrett and her nephew Michael Clark.
Those left behind to mourn her death include: son Larry and wife Terri Lay of Strafford. Their children and grandchildren- Alisha and Kendrick Campbell and Kaiden and Kaleb of Strafford; Ashley and Tommy VanHorn and Alizabeth (Lizzy), Trista and Aubrey also of Strafford; Aaron and Stephanie Lay and Becca of Ozark; son, Frank and daughters Hannah of Strafford and Sierra of Idaho ; sister Beatrice Miller of Springfield and several other members of her and Billy’s extended family.
Ruby’s earthly remains will be laid to rest next to Billy in Clear Creek Cemetery, but her memory will remain in the hearts of her family here.
The family will say their earthly goodbyes during a funeral service at 10:00 AM on Saturday, June 25th at Greenlawn North Funeral Home. The family will also welcome friends and family on Friday evening, June 24th from 6-8pm at the funeral home.
The family would like to extend their heartfelt thanks to the staff at the Strafford Care Center and Preferred Hospice of Missouri. They did an excellent job of taking care of Ruby during her final months on this earth.