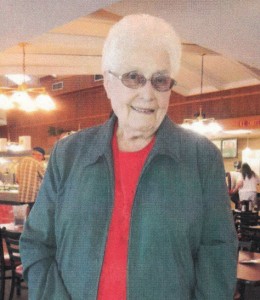 Ruth (89) went to be with her Lord March 30, 2015. She was born Aug. 26, 1925 to James and Jewel (Blackburn) Lawson. She was the second of 4 children, Everett Lawson, Lucille Sopok, and Martha Cox. She married the love of her life Charles Cox on May 21, 1950. Through their love for each other they had two children Charlet and Chuck.
Ruth was preceded in death by her parents, husband, a brother Everett and a sister Lucille.
She is survived by her children Charlet Mobley and her husband Gary, Chuck Cox and his wife Brenda, a granddaughter: Stephanie Cox and fiancé Jeremy Johnston and his daughter Jordyn, a grandson Justin Cox, and a second mother to Kathy Mize along with a host of family and friends.
Ruth was a homemaker and some of her greatest interest were sewing, gardening and before Charlie passed away, motorcycle riding and touring many states on his bike. She told her daughter she decided what she wanted for her 90th birthday and that was to go on a motorcycle ride. Now she can make that ride with the love of her life on gold streets. The week before her passing she patched and mended 28 pairs of blue jeans for her grandson Justin and his buddies.
She was saved as a teenager and was a charter member of Fender Baptist Church in Brighton. She loved her church family and loved being involved in activities, sending out monthly newsletter and cards.
Ruth was a long time member of TOPS, holding several offices, a charter member of Christian Motorcycle Assoc., a member of the BMW Motorcycle Club where she and Charlie held several offices. She was also proud of her ability to ride her exercise bike 10-20 miles a day.
Visitation will be Thursday April 2, 2015 from 6-8 pm at Greenlawn Funeral Home North, with services Friday April 3, 2015 at 10:00 am in the funeral home. Burial will follow at Brighton Cemetery.