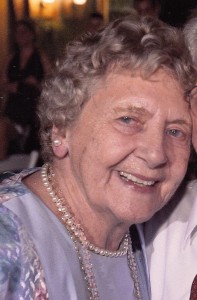 Ruth Mary Gerhart nee Dillman died on April 15, 2015 in Springfield, Missouri due to complication of an acute illness at the age of 85.
Ruth was born on February 15, 1930 in College Point, Queens, New York to her parents, George and Mary Dillman. She married Clifford Francis Gerhart in 1949. The Gerharts moved to Long Island where Ruth was a homemaker until her two children were of school age and afterwards worked as a government employee. After moving to Ohio, the family settled in Fair Grove, Missouri in 1981. Ruth then acquired her nurse’s license and practiced as an LPN until her retirement. Her hobbies were gardening and keeping in touch with life long friends. Ruth was a member of Sacred Heart Church in Springfield.
Ruth is survived by her husband, Clifford; son, Glenn Gerhart and wife Lynn of Branchville, New Jersey; daughter, Karen McCann and her husband Daniel of Mount Vernon, Missouri; her sister, Lorraine Casella of Cairo, New York; her brother Raymond Dillman of College Point, New York; four grandchildren, Brianna Gerhart, Kristina Junior, Joseph Kurtz, and Patrick McCann; and one great-grandson, Jaxson McCann.
Visitation will be from 10 a.m. until 12 p.m., Saturday, April 18, 2015 at Greenlawn Funeral Home East with a prayer service at 12 p.m. Burial will be in Missouri Veterans’ Cemetery at a later date. Memorial contributions may be made to Hospice Compassus.