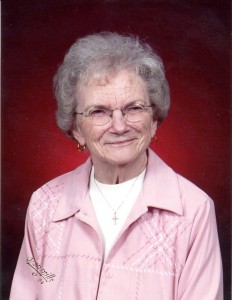 Ruth Phillips was born September 12, 1925 in Sherman, Texas to Kirk and Julia Guin. She passed away Tuesday, March 31, 2015 at The Manor at Elfindale.
In her early teenage years, Ruth’s family moved from Texas to Springfield, MO where she resided the remainder of her life.
Upon graduation from Missouri State Teachers College, she went to work at Harry Cooper Supply Co. where she met Howard Phillips. They were married on April 3, 1949 and remained together until Howard’s death on February 14, 2014.
Ruth had many part-time jobs over the years as well as volunteering at St. Johns Hospital. However, her main passions were her family and church. She was a member of South National and later East Sunshine Church of Christ.
She is survived by one sister, Patricia North; two sons Kirk and wife Julie and David and wife Patti; four grandchildren, Juli Swope, Katie Lebeck, and Ben and Sam Phillips; one step-granddaughter, Andrea Harris; and great grandchildren, Mason, Landon, Abb, Towe, and Claire Lebeck.
The family would like to sincerely thank the staff at The Manor at Elfindale for the excellent care that both Ruth and Howard received during their time there, along with Hospice Compassas.
Funeral services will be held Saturday, April 4, 2015 at 10:00 am in Greenlawn Funeral Home South, with a visitation one hour before starting at 9:00 am. Burial will be at Greenlawn Memorial Gardens following the service. In lieu of flowers donations can be made at East Sunshine Church of Christ Mission Fund.