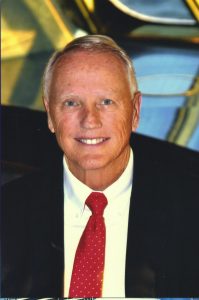 Sammy Ross Claxton was born on April 8, 1941, and passed away peacefully in his home on July 29th at the age of 75.
Sam was born to the late Odus and Amy (Neill) Claxton in Springfield, MO. He attended Parkview High School and Southwest Missouri State College, where he was a football standout.
After graduation, he served in Vietnam as a United States Marine Corp officer, receiving two field promotions. He remained in the service, both as an active-duty Marine and a member of the Marine Corp Reserve.
He was a respected teacher and coach in the Springfield Public Schools district, as well as other area school districts and those in Virginia and Kansas. He received a Master’s Degree in Education from Pittsburgh State University, where he was also a member of the football coaching staff. In addition to teaching and coaching, Sam served as a principal in Kansas and officiated volleyball and track all over Southwest MO.
Sam was an avid runner and tennis player and once was invited to be a line judge at the U.S. Open. Some of his proudest accomplishments were climbing four of the 14,000 ft peaks in Colorado and completing a marathon in Alaska for the Leukemia and Lymphoma Society, all when over the age of 60.
Sam’s laughter will be greatly missed. He shared his humor through his quick wit, a funny “dad” joke, or even just a goofy look. He was an accomplished
builder. He was skilled in fine carpentry and could design and build decks and small buildings. He was an avid reader and enjoyed American history.
He shared his love of history by sponsoring numerous trips over the years where he took over 1,000 eighth grade students to tour our Nation’s capital. In addition to his love of humor, building, and learning, he enjoyed many outdoor activities such as camping, floating, and hiking.
Sam was a true Renaissance man.
After retirement he enjoyed traveling with his wife Mary, spending time with family, and spending the last 3 winters in Mesa, AZ, where he and Mary made many new friends.
Sam was preceded in death by his brother Eugene, and sister Fern.
He is survived by his wife of 44 years, Mary; three children, son Travis and wife Blair, along with their three sons Conner, Jasper, and Ari; daughter Nicole and son Dan, as well as numerous cousins and friends.
Services will be held Wednesday, August 3rd at 11:00a.m. at Greenlawn Funeral Home East with burial in Missouri Veterans Cemetery. Visitation will be held from 6-8p.m. on Tuesday, August 2nd also at Greenlawn Funeral Home East.
In lieu of flowers, Sam requested donations be made to Ozarks Food Harvest.